Humane Society: OSHA Sanctions On Seaworld Are Further Evidence That Orcas Are Unsuitable For Captivity 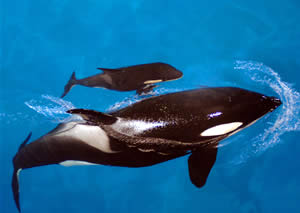 ORLANDO, Florida -- SeaWorld Orlando and its sister park in San Antonio are making final preparations to transport four young killer whales to a zoological park in the Canary Islands.

SeaWorld Orlando recently welcomed the birth of a killer whale, bringing the total there to 10, and the three SeaWorlds nationwide are brimming with two dozen orcas. So the parks have enough that they can safely share four with the Loro Parque zoological park at Tenerife, said Fred Jacobs, spokesman for Busch Entertainment Corp., parent of the SeaWorld parks.

"We've known them for a long time, and they do an excellent job," Jacobs said of Loro Parque, a privately owned facility that features sea lions, dolphins, alligators, parrots and land animals but no killer whales.

Jacobs said Loro Parque trainers have been at SeaWorld in San Antonio for about the past year, learning to care for and train the big black-and-white sea mammals. A 7 million-gallon pool is under construction at Loro Parque to house the animals.

Two juvenile killer whales from Orlando and two from San Antonio will be shipped to the park as soon as the work is complete, possibly in early February, Jacobs said.

The killer whales are not being sold outright, but SeaWorld does have a "financial arrangement" with Loro Parque in the venture, Jacobs said. He would not provide details of the agreement.

SeaWorld has been criticized in the past by animal-rights groups for the sale or transfer of animals, such as sea-lion pups. The Humane Society of the United States on Wednesday repeated its longstanding objection to marine parks that display whales and dolphins, saying that the public should not visit them or support them financially.

"You can do OK with fish, but not whales and dolphins," Humane Society spokesman Richard Farinato said. "There's the space issue, a problem with acoustics, boredom. A tank is a very noisy, unnatural environment."

Farinato said the Humane Society particularly objects to SeaWorld sending killer whales to a park outside the United States, where regulations are less stringent. "It's irresponsible," Farinato said.

Brad Andrews, director of zoological operations for Busch Entertainment, said Wednesday that the SeaWorld parks have been working closely with Loro Parque to make sure it has adequate room and proper training to handle the big animals, which have on rare occasions injured or killed humans.

Andrews said he just returned from a trip to Loro Parque and saw that the massive pool is coming along nicely.

"It's going to be outstanding," Andrews said. "We've been providing technical expertise, not only on the habitat requirements but also on the care and training of killer whales."

Jacobs said the four that will be sent to the Canary Islands are fully weaned and mature enough to be transported.

The Canary Islands are in the Atlantic Ocean southwest of Spain and northwest of Africa, off the coast of Morocco.

Jacobs said the whales will be flown to Tenerife island aboard chartered jets, with the animals secured in reinforced canvas slings that sit inside large watertight transport containers lined with foam.