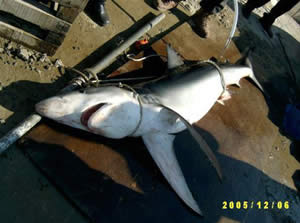 BUSON, South Korea -- The news of the capture of a dangerous shark by five construction workers in the Port of Busan only became widely known recently. The Yeongdo district office in Busan said Friday that a 2.7m-long male great blue shark weighing roughly 100 kg, appeared on Monday afternoon in a road construction site near the Yeongdo breakwater.

The slender shark, with its dark blue backside and white underbelly, sprang out of the water and fell into the construction area, breathing hard as it flailed around. It is highly unusual to encounter a great blue shark, more commonly spotted on the West coast, in the Port of Busan, near the East coast. Indigenous to tropical and temperate seas, the great blue shark is known to inhabit surface waters down to a depth of 500 meters, preying upon a variety of fish and marine mammals. The shark is also a known threat to humans.

In accordance with the wishes of the five workers, the shark was donated to the Marine Museum in Dongnae-gu, Busan, and is waiting to be stuffed for public display.