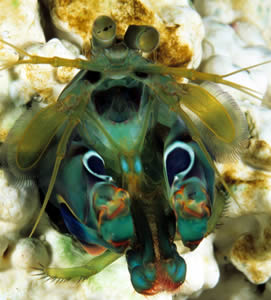 A Swiss marine biologist and an Australian quantum physicist have found that a species of shrimp from the Great Barrier Reef, Australia, can see a world invisible to all other animals.

Dr Sonja Kleinlogel and Professor Andrew White have shown that mantis shrimp not only have the ability to see colours from the ultraviolet through to the infrared, but have optimal polarisation vision — a first for any animal and a capability that humanity has only achieved in the last decade using fast computer technology. The findings are published in the journal PLoS ONE.

"The mantis shrimp is a delightfully weird beastie," said Professor White, of the University of Queensland. "They're multi-coloured, their genus and species names mean 'mouth-feet' and 'genital-fingers'; they can move each eye independently, they see the world in 11 or 12 primary colours as opposed to our humble three, and now we find that this species can see a world invisible to the rest of us."

Dr Kleinlogel, is based at the Max Planck Institute for Biophysics in Frankfurt, and collected the shrimp from the reef. She notes that, "...scuba divers know them as 'thumb-splitters', they've got wickedly strong claws and are very aggressive!"

Most animals can tell how fast the electric field in a light wave is oscillating, which is perceived as colour. (Blue light oscillates faster than green, which is faster than red). The direction of the oscillation is known as polarisation: many animals, from budgerigars to ants have some form of polarisation vision. Since the 1950s, animals have been shown to use linear polarisation vision for navigation, for finding food, for evading hunters, and for sex, or as Professor White says, "...for the four fs: feeding, fighting, fleeing and... flirting."

Commonly, polarisation vision is quite restricted: in its simplest form, different directions of polarisation show up as lighter or darker patches — you can see this yourself by looking at clear blue sky with polarising sunglasses. But polarisation is more subtle than this: the electric field of the light can oscillate back and forth in a line or around and around in a circle, or anywhere in between.

The two scientists have shown that shrimp of the species Gonodactylus smithii have eyes that simultaneously measure four linear and two circular polarisations, enabling them to determine both the direction of the oscillation, as well as how polarised the light is.

"Any changes to the amount of polarisation instantly tells the animal that something is going on."

He continues, "It can't be the whole story in our case, though. We found the same structures in the eyes of both boy and girl mantis shrimps, and yet neither have circularly polarised markings on their bodies. Each eye measures the six polarisation components that are precisely required for optimal polarisation vision. In fact, the physics we used to understand what was going on is the same physics that we use in quantum computing for optimal storage of information."

"We doubt that circular polarisation is used exclusively as a secret shrimp sex signal! It makes more sense that mantis shrimp evolved both circular and linear polarisation receptors to work together so they can detect tiniest changes in any polarisation."

Prof. White notes, "Some of the animals they like to eat are transparent, and quite hard to see in sea-water - except they're packed full of polarising sugars - I suspect they light up like Christmas trees as far as these shrimp are concerned." "And of course," Dr Kleinlogel concludes, "they can still flirt with each other using fancy polarisation cues!"