A Story in Pictures: The Sinking of the Mighty Oriskany Off Pensacola Florida 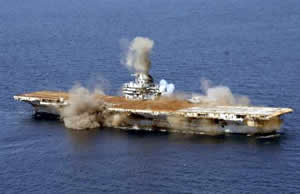 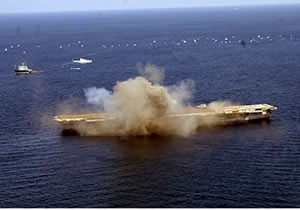 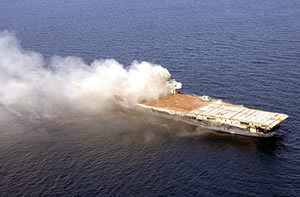 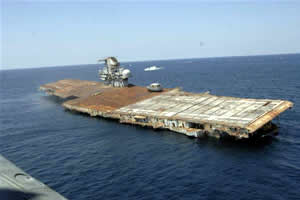 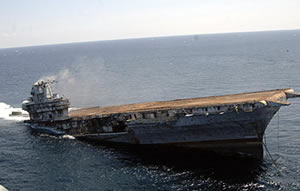 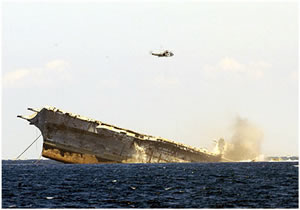 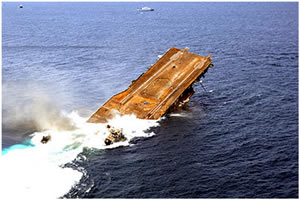 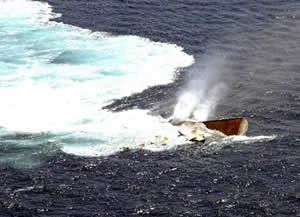 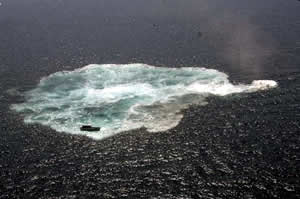 PENSACOLA, Florida -- The ex-Oriskany, a decommissioned aircraft carrier, became the largest ship intentionally sunk as an artificial reef May 17 when it was sunk approximately 24 miles off the coast of Pensacola, Fla.

After 25 years of service to the Navy in operations in Korea, Vietnam and the Mediterranean, ex-Oriskany will now benefit marine life, sport fishing and recreation diving off the coast of the Florida panhandle.

The 888-foot ship took about 37 minutes to sink below the surface after strategically placed explosives were detonated at 10:25 a.m. CDT. The Navy developed an engineered sink plan to place the 32,000 ton ship upright on the ocean floor in a north-south orientation at an existing artificial reef site at a depth of approximately 212 feet, as requested by the state of Florida.

“The Navy and Florida team performed flawlessly to execute today’s sinking. The Navy is thrilled that ex-Oriskany will continue to serve the United States as a tourist and diving attraction off the coast of Florida,” said Glen Clark, deputy program manager of the Navy’s Inactive Ships Program Office. “This is a fitting new beginning for this illustrious ship, and we are proud of the information she has provided us for the reefing of future Navy ships as artificial reefs."

The Navy has been working with the U.S. Environmental Protection Agency (EPA), Florida’s Fish and Wildlife Conservation Commission, the Escambia County Marine Resources Division and the local Pensacola area community since 2003 and has conducted several scientific studies that demonstrated that ex-Oriskany would create an environmentally safe artificial reef.

The ex-Oriskany was the first ship to be environmentally prepared using the EPA’s “Best Management Practices for Preparing Vessels for Use as Artificial Reefs,” and is also the first ship to receive a risk-based Polychlorinated Biphenyl (PCB) disposal approval from the EPA based on the agency’s findings that the reefing would not pose an unreasonable risk of injury to health or the environment.

A few days before the scuttling event, a Navy Explosive Ordnance Disposal team placed explosives and detonation equipment on 22 sea chest pipes and valves inside the ship, which were armed the morning of the sinking.

Ownership of the vessel transferred to the state of Florida as the ship landed on the ocean floor. A 2004 Florida State University study estimated Escambia County would see $92 million a year in economic benefits from an artificial reef.

The Navy will start to offer additional ships for artificial reefs later this year.