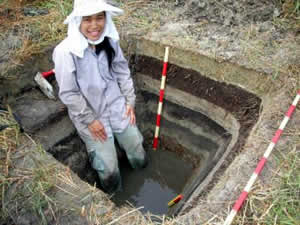 Kruawun Jankaew unearthed evidence that tsunamis have repeatedly washed over a Thai island during the last 2,800 years. Credit: Brian Atwater

TOKYO, Japan -- A quarter-million people were killed when a tsunami inundated Indian Ocean coastlines the day after Christmas in 2004. Now scientists have found evidence that the event was not a first-time occurrence.

A team working on Phra Thong, a barrier island along the hard-hit west coast of Thailand, unearthed evidence of at least three previous major tsunamis in the preceding 2,800 years, the most recent from about 550 to 700 years ago. That team, led by Kruawun Jankaew of Chulalongkorn University in Thailand, included Brian Atwater, a University of Washington affiliate professor of Earth and space sciences and a U.S. Geological Survey geologist.

A second team found similar evidence of previous tsunamis during the last 1,200 years in Aceh, a province at the northern tip of the Indonesian island of Sumatra where more than half the deaths from the 2004 tsunami occurred.

Findings from both teams are published in the Oct. 30 edition of Nature.

Sparse knowledge of the region's tsunami history contributed to the loss of life in 2004, the scientists believe. Few people living along the coasts knew to heed the natural tsunami warnings, such as the strong shaking felt in Aceh and the rapid retreat of ocean water from the shoreline that was observed in Thailand.

But on an island just off the coast of Aceh most people safely fled to higher ground in 2004 because the island's oral history includes information about a devastating tsunami in 1907.

"A region's tsunami history can serve as a long-term warning system," Atwater said.

The research will reinforce the importance of tsunami education as an essential part of early warning, said Jankaew, the lead author.

"Many people in Southeast Asia, especially in Thailand, believe, or would like to believe, that it will never happen again," Jankaew said. "This will be a big step towards mitigating the losses from future tsunami events."

The team found evidence for previous tsunamis by digging pits and auguring holes at more than 150 sites on an island about 75 miles north of Phuket, a Thai tourist resort area ravaged by the 2004 tsunami. That tsunami was generated 300 miles to the west when the seafloor was warped during a magnitude 9.2 earthquake.

At 20 sites in marshes, the researchers found layers of white sand about 4 inches thick alternating with layers of black peaty soil. Witnesses confirmed that the top sand layer, just below the surface, was laid down by the 2004 tsunami, which ran 20 to 30 feet deep across much of the island.

Radiocarbon dating of bark fragments in soil below the second sand layer led the scientists to estimate that the most recent predecessor to the 2004 tsunami probably occurred between A.D. 1300 and 1450. They also noted signs of two earlier tsunamis during the last 2,500 to 2,800 years.

There are no known written records describing an Indian Ocean tsunami between A.D. 1300 and 1450, including the accounts of noted Islamic traveler Ibn Battuta and records of the great Ming Dynasty armadas of China, both of which visited the area at different times during that period. Atwater hopes the new geologic evidence might prompt historians to check other Asian documents from that era.

"This research demonstrates that tsunami geology, both recent and past tsunamis, can help extend the tsunami catalogues far beyond historical records," Jankaew said.

The new findings also carry lessons for the northwest coast of North America, where scientists estimate that many centuries typically elapse between catastrophic tsunamis generated by the Cascadia subduction zone.

"Like Aceh, Cascadia has a history of tsunamis that are both infrequent and catastrophic, and that originate during earthquakes that provide a natural tsunami warning," Atwater said. "This history calls for sustained efforts in tsunami education."