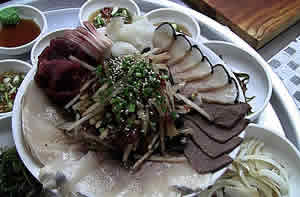 Scientists have identified four species of whales and one dolphin from a plate of sashimi, like this one sold in Seoul. credit Louie Psihoyos, OCS 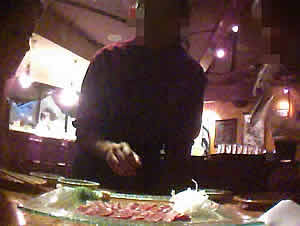 This photo of whalemeat served at an exclusive Los Angeles-area sushi restaurant was taken by "The Cove" filmmaker Charles Hambleton.

Genetic analysis of sashimi served at a prominent Los Angeles sushi restaurant in October of 2009 has confirmed that the strips of raw meat purchased by filmmakers of the Oscar-winning documentary, "The Cove," came from a sei whale â most likely from Japanese "scientific whaling."

"The sequences were identical to sei whale products that had previously been purchased in Japan in 2007 and 2008, which means they not only came from the same area of the ocean â but possibly from the same distinct population," said Scott Baker, associate director of the Marine Mammal Institute at Oregon State University, who conducted the analysis.

"And since the international moratorium on commercial hunting (1986), there has been no other known source of sei whales available commercially other than in Japan," Baker added. "This underscores the very real problem of the illegal international trade of whalemeat products."

Results of the study were published in the Royal Society journal Biology Letters.

"The Cove" director Louie Psihoyos and assistant director Charles Hambleton gained the attention of international news media recently by covertly filming the serving of whale products at The Hump restaurant. Following initial identification of the samples taken from the restaurant, the products were turned over to the National Oceanic and Atmospheric Administration's law enforcement division and in March, federal prosecutors filed a criminal complaint against the restaurant, which since has closed.

Baker said the samples taken from The Hump cannot conclusively be linked to an individual whale because genetic identity records of animals killed through Japan's scientific whaling are not released by the Japanese government. In their paper in Biology Letters, Baker and 10 co-authors â including "The Cove" filmmakers â call for Japan to share its DNA register of whales taken from that country's scientific whaling program and "bycatch" whaling.

"Our ability to use genetics as a tool to monitor whale populations around the world has advanced significantly over the past few years," Baker said, "but unless we have access to all of the data â including those whales killed under Japan's scientific whaling â we cannot provide resource managers with the best possible science.

"This is not just about better control of whaling itself," Baker added, "but getting a better handle on the international trade of whale products."

In their paper published in Biology Letters, lead author Baker and colleagues from the Korean Federation of Environmental Movements also report on 13 whale products purchased at a sushi restaurant in Seoul, South Korea, during two 2009 visits. The sushi was part of a mixed plate of "whale sashimi," and genetic testing by Baker and OSU's Debbie Steel determined that four of the products were from an Antarctic minke whale, four were from a sei whale, three were from a North Pacific minke whale, one was from a fin whale, and one was from a Risso's dolphin.

Further testing by collaborators from Seoul National University confirmed the individual identity of the whale products by DNA "profiling."

The DNA profile of the fin whale meat from the Seoul restaurant genetically matched products purchased by Baker's colleague, Naoko Funahashi, in Japanese markets in 2007 â strongly suggesting it came from the same whale.

"Since the international moratorium, it has been assumed that there is no international trade in whale products," Baker said. "But when products from the same whale are sold in Japan in 2007 and in Korea in 2009, it suggests that international trade, though illegal, is still an issue. Likewise, the Antarctic minke whale is not found in Korean waters, but it is hunted by Japan's controversial scientific whaling program in the Antarctic.

"How did it show up in a restaurant in Seoul?"

Baker has developed an international reputation for his research in determining the origin of whalemeat products sold in markets around the world. His research on identification of dolphin meat contaminated with high levels of mercury was featured in "The Cove," where he worked with Psihoyos and Hambleton.

In their paper, the authors describe the long legacy of falsifying whale catch records, beginning with the Soviet Union, which failed to account for more than 100,000 whales it killed in the 20th century. This illegal, unreported or unregulated whaling "continues today under the cover of incidental fisheries bycatch and scientific whaling."