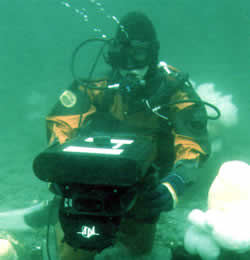 WASHINGTON STATE, US -- A new device has been developed to help divers conduct searches underwater. The engineers at the University of Washington's Applied Physics Laboratory have invented a diver-held sonar with better resolution than any other hand-held sonar used today by the military or civilian sectors.

In addition, the device is the first diver-held sonar to incorporate a tracking system which enables a diver to follow a search grid, deviate from the grid if he or she needs to examine an object more closely and then easily resume the search pattern.

Divers in turbid water, where visibility can be zero, typically use their hands to feel for objects on or suspended just above the bottom, according to Ed Belcher, project lead and engineer with the Applied Physics Laboratory. A diver must set up lines on the bottom with rope, meticulously search a narrow swath along that line, then move the rope and search the next adjacent swath.

The Applied Physics Laboratory's hand-held sonar is about a foot and a half long, sends out 64 acoustic beams when searching and has a resolution of 0.5 degrees. It incorporates a display system and tracking module developed by Coastal Systems Station of Panama City, Fla. Images, which are updated nine times a second, can be seen on a video display in a corner of the diver's mask. Information from the tracking module also is displayed in the corner of the mask.

A diver could, for example, watch the display as he or she moves along the search path for 30 yards and then pan the sonar in a 360 degree sweep. If nothing of interest is seen, the diver could move another 30 yards and complete another 360 degree sweep. When the diver sees something of interest, he or she can approach it for a closer scan, mark its location with a cursor and store its location in the sonar's memory. The sonar then helps the diver get back to the path to continue the search. Each marked target is mapped on the search grid. If the diver wants to return to a marked target, the sonar gives him or her the range and bearing.