Scientists Discover Bacteria That Use Radiated Water as Food; 'A Completely Different World' 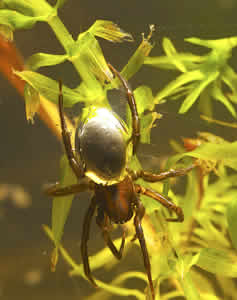 A diving bell spider. The air bubble behaves like a gill, extracting oxygen from the water, according to researchers. Credit: Dr Stefan Hetz

ADELAIDE, Australia -- Researchers have given us new insights into how a species of air-breathing spider can spend its whole life under water, only venturing to the surface occasionally to replenish its air supply.

The 'diving bell spider' or 'water spider' (Argyroneta aquatica) is the only spider that lives entirely under water. It breathes air, which it traps in a dome-shaped web suspended between aquatic plants. It's this bubble that gives the diving bell spider its name.

Until now, scientists have not known how long the spiders could remain underwater and how they use their air bubbles to breathe.

Professor Roger Seymour (School of Earth & Environmental Sciences, University of Adelaide) and Dr Stefan Hetz (Institute for Biology, Humboldt University) have now been able to measure the oxygen levels in the spider's air bubble and observe its behavior.

They found that the 'diving bell' behaves like a gill, extracting oxygen from the water. The spiders only need to dash to the surface once a day to supplement their air supply, and can stay under water for more than 24 hours.

"Previous research had suggested the spiders had to come to the surface as often as every 20-40 minutes throughout the day. Instead, we found that the spiders could sit still for long periods of time, continuing to use their diving bells to extract oxygen even from the most stagnant water on a hot day," Professor Seymour says.

"Being able to stay still for so long - without having to go to the surface to renew the air bubble - protects the spiders from predators and also keeps them hidden from potential prey that come near."

Found in northern and central Europe and northern Asia, the diving bell spider is an "iconic animal", Professor Seymour says.

"Each spider constructs a net of silk in vegetation beneath the surface and fills it with air carried down on its abdomen and rear legs. The spiders spend their entire lives submerged and even lay their eggs in their diving bells. They are fascinating creatures but unfortunately they are becoming increasingly rare in Europe."

Professor Seymour and Dr Hetz have today published their findings in The Journal of Experimental Biology.