Research: 'Four-Eyed' Fish Sees Above And Below Water; 'Gene Duplication Can Lead To Innovation' 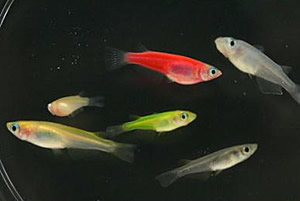 LONDON, England -- There may be plenty of fish in the sea but the medaka knows what it likes. A new study published in the open access journal BMC Biology shows how a single gene mutation that turns Japanese Killifish a drab grey color renders them significantly less attractive to more colorful members of the opposite sex.

The medaka, found commonly in Southeast Asia, can be observed in a wide range of colours; from brown, to more uncommon orange and grey variations. Shoji Fukamachi led a team of researchers from the University of Konstanz, Germany and the University of Tokyo, who studied the effects of alterations in a color-determining gene on mating preferences of the fish.

According to Fukamachi "We observed that the grey medaka were often rejected in favor of their brown or orange rivals. This is the first demonstration of a single gene that can change both secondary sexual characteristics and mating preferences".

The greys, however, need not be completely despondent at these findings, as the study also showed that they were preferentially selective for each other.

Orange colour in medaka is determined by the presence of pigmented structures known as xanthophores, and these are reduced in the grey fish carrying the mutant gene. By over-expressing this same gene, the researchers created super attractive bright orange medaka that induced hyperactivity in similarly engineered members of the opposite sex while other potential mates were ignored almost completely.

"Thus, the present finding of the xanthophore-dependent mate choice enables many ingenious experiments to be designed in this and other fish species" said Fukamachi, adding, "This discovery should further facilitate molecular dissection/manipulation of visual-based mate choice".

The strong like-for-like color preference of medaka mating, suggests that sympatric speciation could occur as reproductive isolation follows color switches due to mutations in this color-determining gene.