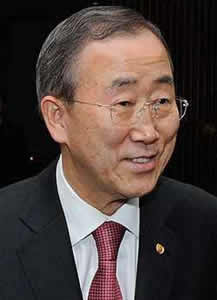 NAIROBI, Kenya -- More people die from unsafe water than from all forms of violence, including war, Secretary-General Ban Ki-moon said today, calling for better protection and sustainable management of one of the Earth’s most precious resources on the occasion of World Water Day.

“These deaths are an affront to our common humanity, and undermine the efforts of many countries to achieve their development potential,” Mr. Ban said in his message for the Day, which this year focuses on “Clean Water for a Healthy World” as its theme.

“Our growing population’s need for water for food, raw materials and energy is increasingly competing with nature’s own demands for water to sustain already imperiled ecosystems and the services on which we depend,” he noted.

“Day after day, we pour millions of tons of untreated sewage and industrial and agricultural waste into the world’s water systems. Clean water has become scarce and will become even scarcer with the onset of climate change,” added the Secretary-General.

In his message, Mr. Ban highlighted that water is vitally linked to all UN development goals, including maternal and child health and life expectancy, women’s empowerment, food security, sustainable development and climate change adaptation and mitigation.

As such, the General Assembly recognized 2005-2015 as the International Decade for Action “Water for Life.”

In doing so, it called for a greater focus on water-related issues at all levels and for the implementation of water-related programs to achieve internationally agreed upon goals, including the Millennium Development Goals (MDGs) – an agenda for poverty reduction agreed to by world leaders in 2000.

The Secretary-General said that the poor “continue to suffer first and most from pollution, water shortages and the lack of adequate sanitation,” even while world leaders have the “know-how to solve these challenges and become better stewards of our water resources.”

In order to address these gaps and with the looming 2015 deadline to fulfill the MDGs, the UN will host a high-level thematic debate in September to coincide with the opening of the Assembly’s annual General Debate in New York.

The Secretary-General has called on Member States to approve and incorporate an accelerated action plan during the summit, saying an inability to meet the MDGs would be an “unacceptable failure, moral and practical.”

Every day around the world, 2 million tons of sewage and industrial and agricultural waste are poured in the Earth’s waters, while one child under the age of five dies every 20 seconds from water-related diseases, according to the UN Environment Program (UNEP).

In a new report, the agency points out that an investment of $20 million in low-cost water technologies, such as drip irrigation and treadle pumps, could potentially lift 100 million poor farming families out of extreme poverty.

The publication, entitled Clearing the Waters: A focus on Water Quality Solutions, found that repairing leaky water and sewage networks can not only secure water supplies, but also lower pollution and boost employment.

In some poorer nations, more than half of treated water is lost to leaks, but by some estimates, saving just half of the water could benefit 90 million people without additional investment.

“Human activity over the past 50 years is responsible for unprecedented pollution, and the quality of the world’s water resources is increasingly challenged,” said UNEP Executive Director Achim Steiner.

“It may seem like an overwhelming challenge but there are enough solutions where human ingenuity allied to technology and investments in nature’s purification systems – such as wetlands, forests and mangroves – can deliver clean water for a healthy world.”

In another report also launched today, UNEP said that transforming wastewater – a combination of fertilizer run-off, sewage and other wastes – into clean resources poses a key challenge, as the world undergoes rapid urbanization, industrialization and stepped up demand for meat and other foods.

res/site/file/publications/sickwater/poster1SickWater.pdf" target="_blank">Sick Water?: The Central Role of Wastewater Management in Sustainable Development noted that many substances that make wastewater a pollutant, such as nitrogen and phosphorus, can be used as fertilizers for agriculture. It can also generate gases to fuel power stations and for cooking.

Currently, some 10 per cent of the global population is eating food grown using wastewater for irrigation and fertilization, and with better management and farmer training, the report said, this could be increased substantially.

Three-day celebrations for World Water Day in Nairobi, Kenya, kicked off on 20 March, bringing together scientists, policy-makers and others to discuss how to address the challenges posed by degrading water quality worldwide.

The General Assembly designated the first World Water Day in 1993, and on 22 March every year since, the focus has been on a different aspect of freshwater sustainability, including sanitation and water scarcity.

The 192-member body today is holding a day-long interactive dialogue on water and the “Water for Life” International Decade, featuring three panel discussions on the MDGs, climate change and peace and security.

“Access to clean water and adequate sanitation are a prerequisite for lifting people out of poverty,” Deputy Secretary-General Asha-Rose Migiro said at the event in New York.

Assembly President Ali Treki told reporters today that he hopes today’s dialogue will “contribute to efforts for a global solution,” underscoring the need to “take stock of where we stand” at the midway point of the International Decade.