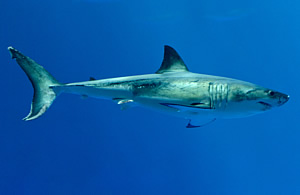 The Monterey Bay Aquarium is deeply saddened to announce the death of the young great white shark released nine days ago off the coast of southern California.

"This is a very difficult day for all of us, and for everyone who saw and cared about this animal," said Jon Hoech, the aquarium's director of husbandry. "Based on the shark's behavior and condition prior to release, we had every confidence that he'd do well back in the wild. Unfortunately, that's not how things turned out. We're surprised and saddened by the outcome."

The 4-foot, 10-inch, 52-pound shark, was transported south to Goleta (Santa Barbara County) by the aquarium's animal care staff on October 25 and released that afternoon. He appeared to be doing well before the release team lost sight of him as he swam away, Hoech said. According to data from the electronic tracking tag, he died minutes after being released.

The electronic tag he carried popped free on Saturday, October 29; began transmitting its stored data on Sunday, October 30; and was recovered that afternoon. It was delivered to the aquarium's white shark team on Tuesday, November 1 for analysis.

"Our animal care staff is unrivaled in its knowledge of young great white sharks," said Jim Hekkers, the aquarium's managing director. "I'm proud of the passion and dedication they demonstrate each day. This is a difficult time for all of us."

The decision to release the shark after 55 days on exhibit was based on changes in how well he was navigating in the exhibit, said aquarium staff veterinarian Dr. Mike Murray ā€" changes that, over time, could result in abrasions that might become a source of infection.

This was not the first time a great white shark on exhibit at the aquarium has experienced "navigation" problems. Back in February 2005, the aquarium released its great white shortly after UnderwaterTimes.com and the Pelagic Shark Research Foundation published exclusive pictures showing the shark with a severely abraded nose. Again in January 2007, the aquarium had to release its captive great white shark citing "snout abrasions" and "logistical challenges" in keeping the wild animal.

"Our first concern is always the health and well-being of the animals under our care," he said. "It became clear that it was time to release him."

"While we determined it was best not to keep him on exhibit any longer, we had no reservations about whether the shark would do well in the wild," Dr. Murray added. "That's why his death is both distressing and puzzling."

In the weeks to come, Hoech said, the aquarium's white shark exhibit and field research team will review all of its procedures and protocols in the wake of the first death among the six young sharks exhibited in Monterey since 2004. An 11th field season, including tagging and tracking sharks in the wild ā€" and potentially bringing a young shark to Monterey ā€" will resume in the summer of 2012.

Five other great white sharks have been successfully returned to the wild after spending periods between 11 days and six-and-a-half months at the aquarium. One other animal ā€" a small shark that fed only once during its 11 days on exhibit ā€" was also transported south to Goleta for release. Four other sharks were released in Monterey Bay.

Tracking tag data from all five sharks confirmed they survived their release, though one of the sharks died four months later in a fisherman's net in Baja California.

Exhibit of young great white sharks is one part of the aquarium's Project White Shark, an effort by the aquarium and its research colleagues to learn more about white sharks in the wild as well as to inspire visitors to become advocates for shark conservation by bringing them face to face with sharks on exhibit.

Since 2002, the aquarium and its research partners have tagged and tracked 47 juvenile great white sharks off southern California. Earlier this year, the aquarium was lead sponsor of legislation enacted in California that outlaws the shark fin trade ā€" a major factor in the global decline of shark populations.

The aquarium has allocated nearly $2 million toward its studies of adult and juvenile great white sharks in the wild ā€" research aimed at better understanding and protecting white shark populations. Details about Project White Shark are available at www.montereybayaquarium.org/cr/whiteshark.aspx.