Researchers Probe Transmission Of Human Pathogen To Coral Reefs; 'Triple Jumps Like This Are Rare'

Aussie Scientists: Communique On The Future Of Coral Reefs And The Human Communities That Depend On Them 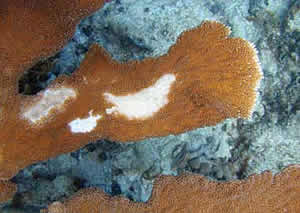 ATLANTA, Georgia -- The spread of lethal diseases from animals to humans has long been an issue of great concern to public health officials. But what about diseases that spread in the other direction, from humans to wildlife? A multidisciplinary team of researchers at the University of Georgia has just been awarded a five-year $2 million Ecology of Infectious Diseases grant from the National Science Foundation and National Institutes of Health to study the first known case of such a "reverse zoonosis" that involves the transmission of a human pathogen to a marine invertebrate, elkhorn coral.

White pox disease has devastated coral reefs throughout the Caribbean and Florida Keys, and is believed to be responsible for much of the coral reef loss there since 1996. White pox disease is caused by a human strain of the common intestinal bacterium Serratia marcescens, which causes the hospital infection serratiosis. Historically, many emerging human diseases, such as AIDS and Ebola, have come from the natural world. The researchers are concerned that the transmission of Serratia marcescens from humans to elkhorn coralmay indicate the beginning of a new phenomenon of diseases jumping from humans to wildlife.

The UGA team will investigate the mechanisms of transmission of white pox disease and the factors that drive its emergence in marine animals. "This bacterium has jumped from vertebrate to invertebrate, from terrestrial to marine, and from anaerobic to aerobic environments," said James W. Porter, associate dean of the Odum School of Ecology and the team's leader. "Triple jumps like this are rare." Understanding the modes of transmission will allow the scientists to attempt to predict future impacts of the disease and to begin to develop effective control strategies.

The scope of the team's research will extend beyond gaining an understanding of the impact of white pox disease on elkhorn coral and how to counter it. The most likely source of the pathogen for coral reefs is under-treated human sewage, so the study will also explore the intersection of public health practices and environmental health outcomes.

"This investigation addresses not only environmental protection, but also the socio-ecological determinants of coastal zone protection," said Porter. "This includes the cost of wastewater treatment infrastructure. Given a reliance on tourism by most Caribbean countries, this study addresses a disease system that is of great economic importance and public health concern to developing nations."

The complexity of the problem required assembling a team of researchers from different scientific disciplines. "The Odum School is extremely well-positioned to lead this study," said Dean John Gittleman. "Working effectively in collaboration with units from across campus is one of our strengths, and aquatic ecology, theoretical ecology and disease ecology are three of our areas of particular depth that facilitate such interdisciplinary team building."

Porter, who has spent decades studying coral reefs in the Florida Keys and the Caribbean, said that this is the most exciting and groundbreaking study of his career. "This is science in action to save an endangered species and a threatened ecosystem," he said. "We are linking good public health practices to effective environmental protection."

Microbiologist Erin K. Lipp, associate professor of environmental health science in the College of Public Health, will be looking at the genetic diversity of Serratia marcescens to determine which of its different strains are pathogenic to corals, and why. She will collect and analyze samples to determine how the different strains of the bacterium are related, and will then conduct challenge experiments. "We'll inoculate fragments of corals with different strains and see which cause signs of disease," said Lipp. "If we can identify strains that do versus those that don't cause disease, we can then conduct genetic comparisons to isolate the genes that are responsible."

Assistant professor Andrew W. Park, who has a joint appointment in the School of Ecology and College of Veterinary Medicine department of infectious diseases, will use the data gathered by Porter and Lipp to create models to inform analysis of the spread of the disease. "My part of the project is about making sense of the data in terms of transmission," said Park. "We'll use the modeling to help test the hypothesis that there is variation for resistance to the bacteria and explore different candidate hypotheses for how the disease spreads. The pathogen can be spread in different ways - for instance, by predatory snails, or through water currents. We're trying to untangle all those competing explanations."

John Wares, assistant professor of genetics in the Franklin College of Arts and Sciences, will be looking into the interactions of the pathogen with the microbial environment of coral reefs in the Caribbean. Unlike humans, corals do not have classic immune systems, with white blood cells to take on and destroy invading bacteria. Instead, they appear to rely primarily on external defense systems, such as beneficial bacteria that live on their surface. Wares will investigate this system to determine whether healthy bacterial communities can defend corals from disease. "This is essentially high-tech community ecology," said Wares. "I'll be looking at what organisms are living on the coral and what role they play in promoting coral immunity." He said he is excited about the opportunity to use next-generation genetic sequencing, through the Georgia Genomics Facility at UGA. "In the past, we might have been limited to looking at a sample of a few hundred microbes from a given sample of the community," he said. "For this study, we can study tens of thousands from each sample. It will be very powerful."

Understanding the transmission process is critical, but Porter said that the study has wider implications. "By incorporating the role of land use practices and water quality into our environmental models of disease prevalence and transmission, this project will have particular significance for sustainable development activities and coastal-zone carrying capacity studies worldwide," he said. "The modeling element of this study connects disease transmission with water quality, climate variability and patterns of human population density. We expect to show that if you upgrade land-based wastewater disposal systems you improve survival of economically important natural resources such as coral reefs."