Study: Over 1,200 Species of Venomous Fish; 'The Worst Pet on Earth' 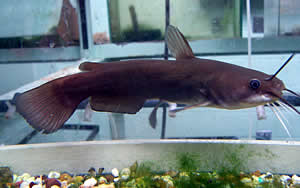 LONDON, England -- In contrast to the exhaustive research into venom produced by snakes and spiders, venomous fish have been neglected and remain something of a mystery. Now, a study of 158 catfish species, published in the open access journal BMC Evolutionary Biology, has cataloged the presence of venom glands and investigated their biological effects.

Jeremy Wright, from the University of Michigan, USA, carried out the investigation. He said, "I used histological and toxicological techniques to elucidate the diversity and distribution of venomous catfish. I found that at least 1250, and possibly over 1600 species of catfish may be venomous, a number far greater than any previous estimate of venomous catfish diversity"

Catfish venom glands are found in association with sharp, bony spines along the leading edge of the dorsal and pectoral fins, which can be locked into place when the catfish is threatened. When a spine enters a potential predator, the membrane surrounding the venom gland cells is torn, releasing venom into the wound. Wright describes how catfish venoms are neurotoxic and hemolytic, and are capable of producing a variety of effects such as severe pain, ischemia, muscle spasm and respiratory distress. However, as any one species examined produces no more than three distinct toxins in its venom, each species may not display all of these properties.

Wright's analyses indicate that there are at least two independent evolutionary origins of catfish venom glands. In addition, the toxic peptides show strong similarities with, and might be derived from, previously characterized toxins found in catfish epidermal secretions. "Further examination of the chemical composition of the venoms will provide valuable insight into the mechanisms and potential selective factors driving venom evolution in fishes", comments Wright.