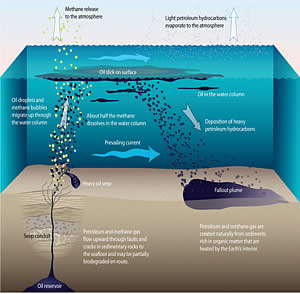 A graphic depicts what happens to the oil, from seep to the fallout plume. (Credit: John E. Cook, Woods Hole Oceanographic Institution)

-- A new study by researchers at Woods Hole Oceanographic Institution (WHOI) and the University of California, Santa Barbara (UCSB) is the first to quantify the amount of oil residue in seafloor sediments that result from natural petroleum seeps off Santa Barbara, California.

The new study shows the oil content of sediments is highest closest to the seeps and tails off with distance, creating an oil fallout shadow. It estimates the amount of oil in the sediments down current from the seeps to be the equivalent of approximately 8-80 Exxon Valdez oil spills.

The paper is being published in the May 15 issue of Environmental Science & Technology.

“Farwell developed and mapped out our plan for collecting sediment samples from the ocean floor,” said WHOI marine chemist Chris Reddy, referring to lead author Chris Farwell, at the time an undergraduate working with UCSB’s Dave Valentine. “After conducting the analysis of the samples, we were able to make some spectacular findings.”

There is an oil spill everyday at Coal Oil Point (COP), the natural seeps off Santa Barbara, California, where 20-25 tons of oil have leaked from the seafloor each day for the last several hundred thousand years.

Earlier research by Reddy and Valentine at the site found that microbes were capable of degrading a significant portion of the oil molecules as they traveled from the reservoir to the ocean bottom and that once the oil floated to sea surface, about 10 percent of the molecules evaporated within minutes.

“One of the natural questions is: What happens to all of this oil?” Valentine said. “So much oil seeps up and floats on the sea surface. It’s something we’ve long wondered. We know some of it will come ashore as tar balls, but it doesn’t stick around. And then there are the massive slicks. You can see them, sometimes extending 20 miles from the seeps. But what really is the ultimate fate?”

Based on their previous research, Valentine and Reddy surmised that the oil was sinking “because this oil is heavy to begin with,” Valentine said. “It’s a good bet that it ends up in the sediments because it’s not ending up on land. It’s not dissolving in ocean water, so it’s almost certain that it is ending up in the sediments.”

To conduct their sampling, the team used the research vessel Atlantis, the 274-foot ship that serves as the support vessel for the Alvin submersible.

“We were conducting research at the seeps using Alvin during the summer of 2007,” recalls Reddy. “One night during that two-week cruise, after the day’s Alvin dive was complete and its crew prepared the sub for the next day’s dive, Captain AD Colburn guided the Atlantis on an all-night sediment sampling campaign. It was no easy task for the crew of the Atlantis. We were operating at night, awfully close to land with a big ship where hazards are frequent. I tip my hat to Captain Colburn, his crew, and the shipboard technician for making this sampling effort so seamless.”

The research team sampled 16 locations in a 90 km2 (35 square mile) grid starting 4 km west of the active seeps. Sample stations were arranged in five longitudinal transects with three water depths (40, 60, and 80 m) for each transect, with one additional comparison sample obtained from within the seep field.

To be certain that the oil they measured in the sediments came from the natural seeps, Farwell worked in Reddy’s lab at WHOI using a comprehensive two-dimensional gas chromatograph (GCÃGC), that allowed them to identify specific compounds in the oil, which can differ depending on where the oil originates.

“The instrument reveals distinct biomarkers or chemical fossils -- like bones for an archeologist -- present in the oil. These fossils were a perfect match for the oil from the reservoir, the oil collected leaking into the ocean bottom, oil on the sea surface, and oil back in the sediment. We could say with confidence that the oil we found in the sediments was genetically connected to the oil reservoir and not from an accidental spill or runoff from land.”

The oil that remained in the sediments represents what was not removed by “weathering” -- dissolving into the water, evaporating into the air, or being degraded by microbes. Next steps for this research team involve investigating why microbes consume most, but not all, of the compounds in the oil.

“Nature does an amazing job acting on this oil but somehow the microbes stopped eating, leaving a small fraction of the compounds in the sediments,” said Reddy. “Why this happens is still a mystery, but we are getting closer.”

Support for this research came from the Department of Energy, the National Science Foundation, and the Seaver Institute.