Scientists Urge World Leaders To Respond Cooperatively To Pacific Ocean Threats; 'We Must Work Together' 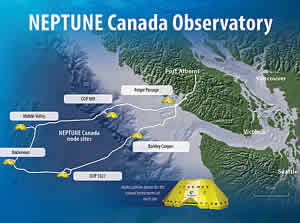 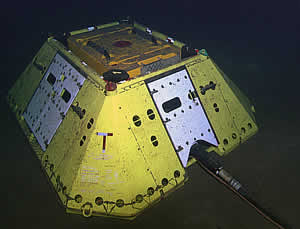 Endeavour node as it appeared one year after installation in 2009. credit Neptune Canada

VICTORIA, Bbritish Columbia -- More than two kilometres down in the inky depths of the Pacific Ocean and 300 km off the coast of Vancouver Island, Canada has just made scientific and technological history. The installation of NEPTUNE Canadaâthe world's largest and most advanced cabled ocean observatoryâhas been completed.

The installation team returned to Esquimalt earlier this week aboard the research vessel T.G. Thompson after four weeks at sea. Most of the voyage was spent at volcanically active Endeavour Ridge, where the team installed two six-kilometer cables and 29 instruments on the seafloor and connected them to the main NEPTUNE Canada network.

"High-pressure work in harsh environments sounds like a recipe for disaster, but the excitement carried us through storms, equipment failure and long shifts. There was a pervasive feeling of being part of a significant achievement," says Dr. Mairi Best, NEPTUNE Canada's associate director (science) and co-leader of the expedition.

NEPTUNE Canada is managed by Ocean Networks Canada for a consortium led by the University of Victoria. Along with its coastal sister, VENUS, it pioneers a new generation of ocean observation systems that, using power and the Internet, provides continuous, long-term monitoring of ocean processes and events, as they happen.

A key member of the installation team was ROPOS, a remotely operated vehicle system managed by the Canadian Scientific Submersible Facility, based in Sidney, BC.

Endeavour Ridge proved to be the team's most challenging installation site. Before laying several kilometres of cable through a subsea mountain range pocked with deep chasms, jagged rocks and belching hot vents, ROPOS "flew" slowly along the route, surveying the bottom with high-resolution sonar.

"For the trickiest parts we crowded around the monitors in the operation room to watch the live video feed," says Dr. Lucie Pautet, NEPTUNE Canada's associate director (engineering) and the other co-chief of the expedition. "It was nerve-wracking and exhilarating at the same time."

When repairs or adjustments were needed, the team had to quickly improvise. "Like deep space missions, these tasks must be accomplished using only onboard resources and personnel, assisted by colleagues on shore who are in constant communication," says Best.

Every year for the next 25 years, NEPTUNE Canada will amass more than 60 terabytes of scientific dataâequivalent to the text in about 60 million booksâon biological, physical, chemical and geological processes in the Pacific Ocean.

The data will have policy applications in the areas of climate change, hazard mitigation (earthquakes and tsunamis), ocean pollution, port security and shipping, resource development, sovereignty and security, and ocean management.