Scientists: Two Sharks Among 52 New Species Found in Indonesian Waters; 'This is the Epicenter of Marine Biodiversity' 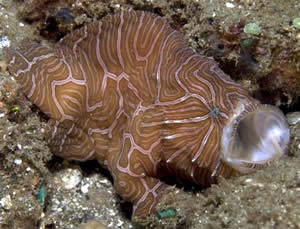 In this image the inside of the fish's mouth can be seen as it yawns. Photo: M. Snyder, starknakedfish.com/divingmaluku.com 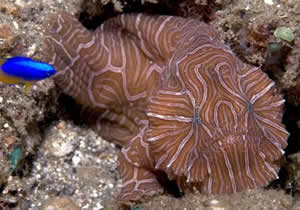 SEATTLE, Washington -- A fish that would rather crawl into crevices than swim, and that may be able to see in the same way that humans do, could represent an entirely unknown family of fishes, says a University of Washington fish expert.

The fish, sighted in Indonesian waters off Ambon Island, has tan- and peach-colored zebra-striping, and rippling folds of skin that obscure its fins, making it look like a glass sculpture that Dale Chihuly might have dreamed up. But far from being hard and brittle like glass, the bodies of these fist-sized fish are soft and pliable enough to slip and slide into narrow crevices of coral reefs. It's probably part of the reason that they've typically gone unnoticed -- until now.

The individuals are undoubtedly anglerfishes, says Ted Pietsch, a UW professor of aquatic and fishery sciences who has published 150 scholarly articles and several books on anglerfishes and is the world's leading authority on them. In the last 50 years scientists have described only five new families of fishes and none of them were even remotely related to anglerfishes, Pietsch says.

Husband and wife Buck and Fitrie Randolph, with dive guide Toby Fadirsyair, found and photographed an individual Jan. 28 in Ambon harbor. A second adult has since been seen and two more -- small, and obviously juveniles -- were spotted March 26, off Ambon. One of the adults laid a mass of eggs, just spotted Tuesday.

The Randolphs are part-owners of Maluku Divers, a land-based dive facility in Ambon City. Toby Fadirsyair, who works for Maluku Divers, said he may have seen something similar 10 or 15 years ago but the coloring was different.

Reference books were consulted but nothing similar to the fish photographed in January was found. Seeking international fish experts eventually led them to Pietsch.

"As soon as I saw the photo I knew it had to be an anglerfish because of the leglike pectoral fins on its sides," Pietsch says. "Only anglerfishes have crooked, leglike structures that they use to walk or crawl along the seafloor or other surfaces."

Anglerfishes -- also called by names like frogfishes and toadfishes -- are found the world over and typically have lures growing from their foreheads that they wave or cause to wiggle in order to attract prey. Get too close to the lure and you're lunch.

The newly found individuals have no lures so they seek their prey differently, burrowing themselves into crevices and cracks of coral reefs in search of food.

"Several times I saw these fish work themselves through an opening that seemed much smaller than the fish, sometimes taking a minute or more to get all the way through," says David Hall, an underwater natural history photographer who was able to dive with Maluku Divers and take additional photos of the new find. "They must have pretty tough skin to keep from being scraped and cut, but there is no evidence of superficial injury or scars in my photographs."

With its unusual flattened face, the fish's eyes appear to be directed forward, something Pietsch says he's never seen in 40 years as an icthyologist, a scientist who studies the structure, classification and habits of fishes. Most fishes have eyes on either side of their head so that each eye sees something different. Only very few fishes have eyes whose radius of vision overlaps in front, providing binocular vision, a special attribute well developed in humans that provides the ability to accurately judge distance.

Randolph, a longtime diver, says the similar color pattern of the two adults surprises him because he typically sees variations in skin color between members of the same anglerfish species and has even seen individual anglerfish that change colors depending on the surroundings.

Whether the new fish represent a new family will entail DNA testing and a close examination of a specimen, says Pietsch, whose anglerfish work is currently funded by the National Science Foundation. Scientists have already described 18 different families of anglerfishes and this is probably a 19th, Pietsch says. Families are large groupings, for example, all dog species belong to the larger family that includes wolves, coyotes and, even, hyenas. One can see an example of an anglerfish family, the one named Antennariidae, at http://www.tolweb.org/Antennariidae/21993, a part of the Tree of Life Web project.

When only a single fish had been sighted, Randolph and Andy Shorten, co-owner of Maluku Divers, kept the find quiet to protect the animal. With more individuals being found, and having a better idea of where to look to find others, the two became comfortable enough to post images on the firm's Web site, see http://www.divingmaluku.com/new-frogfish.html.

"Seeking out these fish is probably going to be like the Holy Grail of divers for a while," Shorten says. Indeed just do a Google search for "new frogfish Ambon" on the Internet and up pops a lot of dive sites carrying news of the find.

"I don't think it will turn out that there are a lot of these animals but all that scrutiny will help us find out for sure," Shorten says.

For example, 35 years ago nobody realized pygmy seahorses existed but once they were discovered and people understood where to look for them, they turned out to be widespread throughout the ocean.

The fish were seen in 15 feet of water. It's possible the fish could be found at other locations, Pietsch says. All other anglerfish families have ranges broader than a single island group and ocean conditions like those at Ambon are found at various places across Indo-Australian waters.