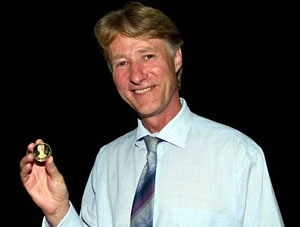 Rhodes University's Prof Christopher McQuaid has been awarded the prestigious Gilchrist Award for his "outstanding contribution to the enhancement of marine and coastal science in South Africa including the Southern Ocean".

The South African Network for Coastal and Oceanic Research (SANCOR) presents the award to a "distinguished marine scientist" every three years.

Prof McQuaid, who holds the Chair of Zoology and the SARCHI Research Chair in Marine Ecosystems at Rhodes, said it was a "great honor" to be a recipient of the award.

It was presented to him at a banquet of the 14th Southern African Marine Science Symposium held in Grahamstown in April.

But Prof McQuaid insists that it is also an acknowledgment of Rhodes University's stature in the field of marine biology.

Rhodes University Professor of Zoology William Froneman said in his citation of Prof McQuaid that he was a most worthy recipient of the 2011 Gilchrist award. He had played a "significant role" in the development of marine science in the Eastern Cape Province of South Africa through his outstanding research publication record; his supervision of postgraduate students - many from previously disadvantaged backgrounds - and the establishment of strong collaborative links with tertiary institutions within the region.

"Christopher McQuaid can be regarded as one of the eminent marine biological researchers in South Africa. His contribution to the development of a vibrant marine research community in the Eastern Cape province of South Africa cannot be overemphasized. The mentorship role that he has played for a number of younger researchers within the region has ensured that the future of marine biological research in the province is assured," said Prof Froneman

Prof McQuaid has been the recipient of numerous other awards including Rhodes University's Vice-Chancellor's Junior as well as Senior Distinguished Research Awards.

He has been awarded a number of fellowships including two Ernest Oppenheimer Memorial Trust Fund Travelling Fellowships and the Sir Kirby Laing Fellowship from the University of Bangor. He has been elected Fellow of the Royal Society of South Africa - a prestigious recognition of his standing as scientist.

Prof McQuaid acknowledges that mentorship is central to his work. "Partly, this is because it is my job to train postgraduate students, but mostly it is because I enjoy working with young and inspired minds. They make me see things from different perspectives and help me to get new insights."

Speaking on the many collaborative links he has forged with other tertiary institutions, Prof McQuaid says he enjoys working with people from other countries with different cultural backgrounds. He collaborates with scientists in South Africa as well as from many countries in Europe, South America and Asia. "Not only do people from other countries have different perspectives on science, but I love the cultural diversity this introduces."

While South Africa was "biologically a very exciting place" for marine scientists, Prof McQuaid and his students also do research in places like South America and East Africa. "Last year I had students working in Zanzibar, Italy, Kenya and Tristan da Cunha. Tell me that's not exciting."

However, he warns against the tendency to "isolate ourselves".

"I understand the reasoning behind an attempt to appoint South Africans either in jobs or as students, but in the longer term we should be doing everything in our power to attract and retain talent from other countries as well."

Prof McQuaid was particularly delighted that one of his students, Given Matumba, won the prize for the best poster at the conference. He said the "beautiful poster" had been based on research Mr Matumba had done on the reaction of marine snails to temperature increases.

Dr Peter Clayton, Deputy Vice-Chancellor: Research & Development said, "This is a prestigious award to receive. It is awarded infrequently and to a marine biologist who has made a national and international impact through their research.

"This is wonderful recognition both of Professor McQuaid, who is undoubtedly one of South Africa's leading marine scientists, and of Rhodes University which, through the work of Prof McQuaid and others, has earned a reputation as one of the top universities on the African continent in the field of Marine Biology."