Researchers: Whales May Turn Down Their Hearing Sensitivity When Warned Of An Impending Loud Noise 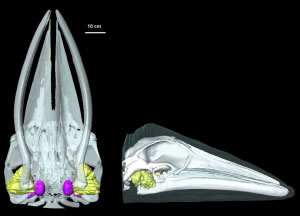 WOODS HOLE, Massachusetts -- For decades, scientists have known that dolphins and other toothed whales have specialized fats associated with their jaws, which efficiently convey sound waves from the ocean to their ears. But until now, the hearing systems of their toothless grazing cousins, baleen whales, remained a mystery.

Unlike toothed whales, baleen whales do not have enlarged canals in their jaws where specialized fats sit. While toothed whales use echolocation to find prey, baleen whales generally graze on zooplankton, and so some scientists have speculated that baleen whales may not need such a sophisticated auditory system. But a new study by scientists at Woods Hole Oceanographic Institution (WHOI), published April 10, 2012, in The Anatomical Record, has shown that some baleen whales also have fats leading to their ears.

The scientists propose that toothed whales may not be the only whales that use fats to transmit sound in water, as previously believed, and the fats in both types of whales may share a common evolutionary origin.

Little progress had been made on the auditory anatomy of baleen whales because specimens to study are hard to get. Unlike many toothed whales, they are large, not kept in captivity, rarely strand on beaches, and decompose rapidly when they do.

For the new study, lead author Maya Yamato, a graduate student in the MIT/WHOI Joint Program in Oceanography, received seven heads of minke whales that stranded and died, mostly on beaches on Cape Cod. She collaborated with the International Fund for Animal Welfare's (IFAW) Marine Mammal Rescue and Research unit in Yarmouth Port, Mass.

The whale heads were scanned using computerized tomography (CT) and magnetic resonance imaging (MRI) at the Computerized Scanning and Imaging (CSI) lab at WHOI and MRI facility at Massachusetts Ear and Eye Infirmary in Boston. Using these biomedical techniques, the researchers generated 3-D visualizations of the whales' internal anatomy, with both bones and soft tissue intact and in their undisturbed natural positions, providing "an unprecedented view of the internal anatomy of these animals," the scientists wrote.

Then the whale heads were dissected in the necropsy facility at the Marine Mammal Center at WHOI. Together, the studies showed that all the minke whales had "a large, well-formed fat body" connecting to the ears, providing a potential transmission pathway guiding sound from the environment to their inner ears.

"This is the first successful study of intact baleen whale head anatomy with these advanced imaging techniques," said WHOI Senior Scientist Darlene Ketten, director of the CSI lab at WHOI and co-author on the paper. "It really is an important addition to our understanding of large whale head and auditory systems."