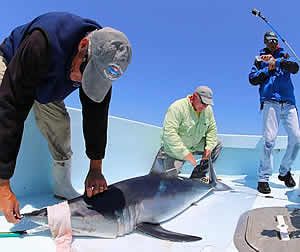 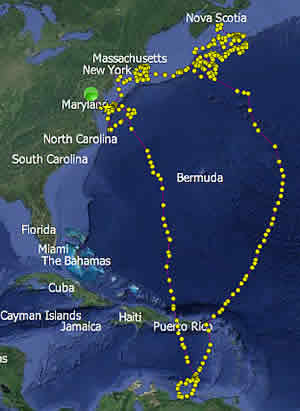 "St. Marys", a young shortfin mako caught, satellite tagged and released off Ocean City, Maryland 358 days ago proved to be an ambassador for the Guy Harvey Research Institute's shark research program. St. Marys, named for St. Marys Central School in Martins Ferry, Ohio, logged some 9,200 miles with an amazing journey that took him as far north as Nova Scotia, south to just off the coast of Venezuela, a short visit to Puerto Rico and then north again to the waters where he was first caught.

This week St. Marys' satellite pings were tracked on land in Baltimore. His journey and his life had ended.

He managed to make news all along his journey and was about to enjoy a reunion with other makos caught last May, which are also gathering in nearby waters following their nearly yearlong journeys.

This week scientists at GHRI, part of Nova Southeastern University's Oceanographic Center and the University of Rhode Island, are back off Ocean City catching, tagging and releasing shortfin makos. Researchers have a special interest in understanding mako shark migratory behavior because this information is essential for proper fisheries management of this internationally roving species.

The loss of tagged fish and the data they were providing is a concern for researchers, who not only lose the animal and important information it was transmitting or collecting but the equipment, which in some cases can cost up to $4,000 per tag.

One oceanographic research team in South Florida, for example, has lost seven satellite transmitter tagged sharks to fishing in the last two years, representing over 20 percent of the sharks they were tracking.

"We're asking fishermen, who catch a tagged animal to do one of two things. If it's alive and healthy, please release the animal as quickly as possible so it can continue its travels and provide important scientific data. If it is dead, please retrieve the tag and return if possible," said Dr. Mahmood Shivji, the director of Nova Southeastern University's Guy Harvey Research Institute and Save Our Seas Shark Research Center.

Each tag, according to Dr. Shivji, will have a serial number and the manufacturer's contact information. The fishermen are asked to get in touch with the manufacturer and provide information on where and when the fish was caught. This information will be conveyed to GHRI, who will contact the fishermen to make arrangements for the return of the tag and the reward.

The Guy Harvey Research Institute is currently tracking dozens of sharks as well as marlins and sailfish. The public can follow their movements in near real-time courtesy of an interactive website set-up by GHRI www.ghritracking.org.

The website is an educational outreach component of the institute's quest to study shark and billfish long-distance migration patterns, with the ultimate goal being to better understand and protect them, as some species are threatened or endangered.