Chinese City to Set Up Breeding Base of Rare Dolphin; 'Pandas of the Ocean' 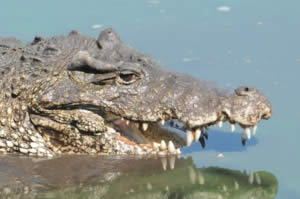 A new study confirms that Cuban crocodiles are hybidizing with American crocodiles in the wild. credit Steve Zack/Wildlife conservation Society

NEW YORK, New York -- A new genetic study by a team of Cuban and American researchers confirms that American crocodiles are hybridizing with wild populations of critically endangered Cuban crocodiles, which may cause a population decline of this species found only in the Cuban Archipelago.

Cuban crocodiles and American crocodiles have been confirmed to interbreed in captivity and were suspected to hybridize in the wild. This is the first genetic study that confirms wild hybridization.

Known for their leaping ability and aggressive disposition, Cuban crocs are a charismatic and culturally significant species to Cuba. Exact population estimates for the species remain unknown, though scientists believe that a minimum of 3,000 individuals remain in the Zapata swamp. A smaller population exists in the Lanier Swamp on the Island of Youth. The species was extensively hunted from the middle of the 19th century through the 1960s resulting in drastic population declines.

The team collected and analyzed DNA from 89 wild-caught Cuban and American crocodiles in the wild and two samples from crocodiles in zoos.

The authors say that hybridization may be one of the most important threats to Cuban crocodiles, along with illegal hunting and habitat modification. Hybridization can result in both replacement and genetic mixing, and one lineage may cause the extinction of another.

WCS is grateful to the John D. and Catherine T. MacArthur Foundation and the Christopher Reynolds Foundation for supporting critical conservation work in Cuba.

The Wildlife Conservation Society saves wildlife and wild places worldwide. We do so through science, global conservation, education and the management of the world's largest system of urban wildlife parks, led by the flagship Bronx Zoo. Together these activities change attitudes toward nature and help people imagine wildlife and humans living in harmony. WCS is committed to this mission because it is essential to the integrity of life on Earth. Visit: www.wcs.org