Research: Mussels Used To Track Level Of Pollution In Ports 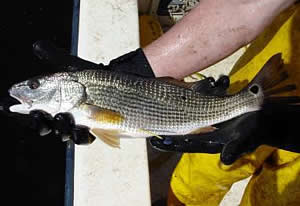 A subadult red drum wears a conventional tag, just before being released into the Neuse River in eastern North Carolina. Credit: Nathan Bacheler

RALEIGH, North Carolina -- Recreational anglers and commercial fishermen understand you need good fishery management to make sure there will be healthy populations of fish for generations to come. And making good management decisions rests in large part on understanding the mortality of fish species – how many fish die each year as a result of natural causes and recreational and commercial fishing. Now researchers at North Carolina State University have utilized a new research method that can give fishery managers a better idea of how fish are dying, so they can make informed decisions on how to ensure a healthy fish population.

Fisheries scientists from NC State have, for the first time, implemented a research strategy that uses both “conventional” tags and ultrasonic telemetry tags (transmitters) to estimate mortality rates. The approach was used in a study on mortality rates of “sub-adult” red drum, which are red drum that are close to adult in size but have not yet begun to reproduce. However, the research methods pioneered in this study could be applied to many other species, including popular fish such as striped bass. Red drum are popular among recreational anglers in many parts of the country, and are also important to commercial fishermen in North Carolina.

The conventional tags offer rewards to recreational and commercial fishermen who catch the tagged fish, creating an incentive for them to contact researchers. This approach lets researchers know how many of the tagged fish have been caught and how many of the fish were subsequently released or harvested, explains Dr. Jeff Buckel, an associate professor of biology at NC State and co-author of the study. This approach provides particularly good data on mortality resulting from commercial and recreational fishing, Buckel says.

The telemetry tags transmit uniquely coded sounds to receivers, allowing researchers to track fish movement in a given area. In this instance, the researchers were using both stationary receivers and mobile hydrophones to track tagged fish in the Neuse River estuary in eastern North Carolina, Buckel says. Telemetry tags provide excellent data on natural mortality, because the tags stop moving once the fish has died. These tags can also detect that a fish has been caught by commercial or recreational fishermen, because the tag will disappear from the study area without swimming past any of the receivers.

“The methodology we used in this study combined good natural mortality data from the telemetry tags with good recreational and commercial fishing mortality data from the conventional tags to give us a more precise estimate of overall mortality for sub-adult red drum,” Buckel says. “This is important because, if you have a good understanding of mortality rates, you can make informed decisions about how to manage a fishery in order to ensure its long-term health.” For example, the information generated by this study contributed to state and regional assessments of the red drum population.

“This is the first time this approach, using both kinds of tags, has been used in the field,” Buckel says, “and it could have significant applications for other species, such as striped bass.” One limitation is that the telemetry tags are only useful in relatively confined areas, such as lakes, estuaries or reservoirs – where researchers can place listening devices near exits to determine if a fish has left the waterbody on its own, rather than being caught by a fisherman.

The researchers, led by then-NC State Ph.D. student Nathan Bacheler, focused on sub-adult red drum because North Carolina only allows recreational and commercial fishermen to keep drum that are between 18 inches and 27 inches long. These fish are generally not old enough to reproduce. So researchers wanted to determine whether natural mortality and fishing mortality were limiting the long-term viability of the fishery. Good news fish fans: “Natural mortality was much lower than we previously assumed,” Bacheler says, “and the fishing mortality was similar to previous estimates.”

The research, “A combined telemetry – tag return approach to estimate fishing and natural mortality rates of an estuarine fish,” was funded by North Carolina Sea Grant and is published in the August issue of the Canadian Journal of Fisheries and Aquatic Sciences. The study was co-authored by Bacheler, Buckel, NC State biology professors Dr. Joseph Hightower and Dr. Kenneth Pollock, and Lee Paramore of the North Carolina Division of Marine Fisheries.