From A Bucket Of Seawater, New Understanding Of The Ocean; 'Predation, Viral Infections, And The Divergent Fate Of Close Relatives' 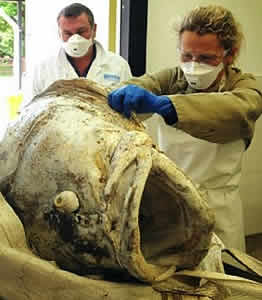 Groper death mystery: UQ researchers are conducting autopsies on a gropers that are found washed up along Queensland's coastline.

BRISBANE, Queensland -- Researchers are in a race against time to save Queensland's protected groper fish, which are washing up dead along the beaches of Northern Queensland in increasing numbers.

Associate Professor Andy Barnes, from The University of Queensland's (UQ) School of Biological Sciences, has teamed up with Dr Rachel Bowater from the State Veterinary Laboratory in Townsville and Dr's Nouri Ben Zakour and Scott Beatson from UQ's Australian Infectious Diseases Research Centre to find out what is causing the fish deaths.

Research indicates the bacterium species Streptococcus agalactiae is responsible for the death of the groper fish, although the underlying cause behind the infectious nature of this micro-organism is yet to be determined.

"We need a better understanding of the groper's immune system, where the bacteria come from, and how and why they cause diseases in gropers and other marine animals," Dr Barnes said.

"We are in the process of sequencing 20 complete genomes from strains of the bacteria from gropers and other marine animals and comparing them with those found in humans and other warm blooded animals," he said.

"We expect the results to yield fresh insights into how these bacteria evolved to be pathogenic, giving us a chance to counteract the effects."

Dr Barnes said group B Streptococcus colonises the urogenital tract of a large number of the female human population, but is usually benign.

Since 2007, 91 gropers have been found dead along beaches in QLD, mainly around Cairns, Port Douglas and Townsville. Deaths have also been recorded from the Brisbane River in the south to Karumba in the Gulf of Carpentaria in the state's north.

Dr Barnes said that as many of the deaths occurred in remote locations, obtaining diagnostic samples has been difficult, but the Streptococcus bacterium was isolated from more than 10 of these cases.

Gropers were spawned for the first time in captivity at the Northern Fishery Centre in Cairns and are now being reared in the aquarium at UQ's St Lucia campus as part of the investigation into the ongoing deaths.

The Queensland groper fish, a protected species, is one of the largest reef-dwelling fish in the world and grows up to 3m in length. Curious and tame by nature, they are a favorite among divers.