Research: Killer Whales May Have Menopause So Grandma Can Look After The Kids

What Do Killer Whales Eat In The Arctic? 'Whatever They Can Catch' 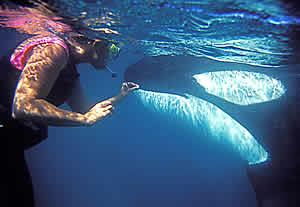 LONDON, England -- At seven meters long and weighing six tonnes, the Killer Whale is among the most feared creatures in the ocean â one of the few fierce enough to battle and beat sizeable sharks.

Most would consider it madness to enter the water with them, but New Zealander, Ingrid Visser thinks differently. She is the only scientist in the world to swim with the species â called Orca by some, and officially named Orcinus Orca (from the Latin for 'from the world of the dead').

Her maverick approach has revolutionized our understanding of these extraordinary creatures â and uncovered a trend which threatens their existence. Swimming alone along New Zealand's 9,000 miles of spectacular coast, she's become an expert on a unique band of shark and ray-hunting Killer Whales.

Recently Ingrid has noticed a worrying trend. An already critically-endangered population of about 200 is no longer increasing and, worse, 2010 saw an unusual number of deaths. THE WOMAN WHO SWIMS WITH KILLER WHALES charts Ingrid's one-woman mission to find out what's going on her disturbing discoveries about the health of our oceans.

Breaking research unveiled in the film reveals that:

The film also shows that the problems facing New Zealand's killer whales are mirrored around the world, including that in some marine places, levels of flame retardants are doubling every three to four years. Research suggests many of the pollutants found in the Orca are also in humans.

For more information on Dr. Visser's work, see the www.orcaresearch.org/.