Scientists Develop Muscular Transgenic Trout With 'Six-Pack' Abs; 'Our Findings Are Quite Stunning' 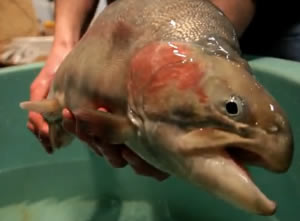 A 10-year effort by a University of Rhode Island scientist to develop transgenic rainbow trout with enhanced muscle growth has yielded fish with what have been described as six-pack abs and muscular shoulders that could provide a boost to the commercial aquaculture industry.

Terry Bradley, a URI professor of fisheries and aquaculture, said his research into the inhibition of myostatin, a protein that slows muscle growth, has obtained "stunning results" in the last two years, with trout growing 15 to 20 percent more muscle mass than standard fish.

"Belgian blue cattle have a natural mutation in myostatin causing a 20 to 25 percent increase in muscle mass, and mice overexpressing myostatin exhibit a two-fold increase in skeletal muscle mass. But fish have a very different mechanism of muscle growth than mammals, so we weren't certain it was going to work," Bradley said.

According to Bradley, the number of muscle fibers in mammals is limited after birth, but in fish, muscle fiber numbers increase throughout their lifespan. Since inhibition of myostatin increases the numbers of muscle fibers, it had been a mystery as to whether inhibiting myostatin would cause an increase in muscle growth in fish.

Bradley and a team of graduate students spent 500 hours injecting 20,000 rainbow trout eggs with various DNA types designed to inhibit myostatin. Of the eggs that hatched, 300 carried the gene that led to increased muscle growth. After two years, most exhibited a "six-pack ab" effect, even though fish lack standard abdominal muscles. They also have increased musculature throughout, including a prominent dorsal hump that made them look like they had muscular shoulders.

The first generation of transgenic trout were subsequently spawned, and offspring carrying the gene in all of their muscle cells have been produced. Studies are under way to determine if the fish grow at a faster rate as well.

"Our findings are quite stunning," said Bradley, who also studies salmon, flounder and tuna. "The results have significant implications for commercial aquaculture and provide completely novel information on the mechanisms of fish growth. The results also allow for comparisons between the mechanisms of growth of muscle in mammals versus fish, and it could shed light on muscle wasting diseases in humans."

About 500,000 metric tons of rainbow trout are raised each year in aquaculture facilities in the United States and Europe. In the U.S., some 1,000 trout farms produce approximately $80 million of trout annually, mostly in Idaho, New York, Pennsylvania and California. Assuming Bradley's transgenic fish meet with regulatory approval, it could provide a boost to the industry by enabling aquaculturists to grow larger fish without increasing the amount of food the fish are fed.

"One of the advantages of this approach is that the modified genes introduced into the fish use the same mechanism and cause the same type of effect that occurs naturally in Belgian blue cattle and other 'double muscled' animals," said Bradley.

While the transgenic trout may look like bodybuilders, Bradley said they exhibit normal behaviors. He will continue to study the fish to learn if the new gene affects any other genes, and to determine if new husbandry practices will aid in the raising of the trout.