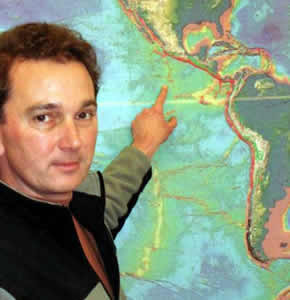 Geologist Douglas Toomey shows where his team has been studying volcanic plumbing and mantle-plate interactions on the Pacific Ocean floor. 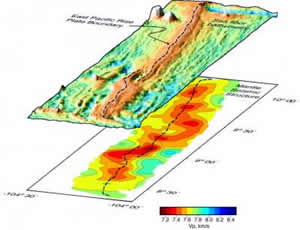 EUGENE, Oregon -- After years of results that repeatedly dogged him, University of Oregon geologist Douglas R. Toomey decided to follow the trail of data surfacing from the Pacific Ocean. In doing so, he and his collaborators may have altered long-held assumptions involving plate tectonics on the ocean floor.

Reporting in the March 22 issue of Nature, Toomey and co-authors from four other institutions propose that, one, the flow in the Earth's mantle is rotated beneath the East Pacific Rise, causing the plate boundary to change orientation with time. Secondly, they argue that deep-sea hydrothermal vents frequently form above volcanoes where upwelling of the mantle and spreading of the plates are aligned.

Surprisingly, Toomey added, the amount of magma produced by volcanoes under both aligned and non-aligned mantle-plate regions is relatively equal, but that magma only in aligned sections regularly breaches the crust. When the volcanic plumbing between the mantle and crust is not aligned, magma cools and volatiles are lost as the magma moves laterally, he said. Most of the magma then remains under the sea floor.

For years, geologic theory has predicted that magma production alone is vital to fuel hydrothermal vents, or the “hot smokers” where microorganisms such as the Archaea thrive. These new findings indicate that the volcanic-plumbing system better explains why one volcano hosts hot smokers, while another does not, Toomey said.

“We've had the data since 1997 and the germ of our results for the last six years,” said Toomey, whose funding came through the Ridge 2000 initiative of the National Science Foundation. “We've really solidified our findings in the last 18 months. The mantle is moving or flowing in one direction, and the plate boundary is trying to catch up. We've talked for years about passive flow models for ocean ridges - the mantle upwells as a passive response to plate motion. Now we see the mantle flow is not entirely passive or controlled by the overlapping plates. The mantle flow provides a driving force for plate motion. This discovery is remarkably surprising.”

The researchers performed a first-of-its-kind imaging of the upper-most mantle. They dropped numerous ocean-bottom measuring devices to capture seismic data that are used to make tomographic images - similar to those obtained in medicine with computerized axial tomography, or CAT scans - of the patterns of magma delivery to the crust, in this case the ocean floor. This allowed researchers to explore both the isotropic and anisotropic structure of material in the mantle. “Our results allow conclusions to be drawn about the driving and controlling processes for segmentation of fast-spreading ridges,” the researchers wrote in their study.

“A big question in the ridge community has been: What is the connection between mantle processes that are generating magma and the overlying sea-floor hydrothermal systems?” Toomey said. “This study at 9 North gives us a unique picture of mantle-crust segmentation at a level never before seen.”

Hydrothermal vents occur most often where plate spreading and mantle upwelling are aligned. More heat from volcanic activity reaches the sea floor, and both sides of the ridge are flat and wide, with an abundance of lava being erupted. The non-aligned zones, where magma upwelling is not directly beneath the rise, are deeper, with less frequent eruptions on the surface, and they lack hot smokers.

However, Toomey said, the deeper ridge is magmatically active, actually producing the same or more magma but not as surface eruptions. Instead, the magma is cooled at depth or intruded. “At both places, the plates are spreading apart at the same rate,” Toomey said. “The deeper areas look older on the surface, like they are being stretched. Yet these areas are still accumulating magma beneath the sea floor.”

The data his team compiled and analyzed, Toomey said, show that the segmentation of the ridge system is related to the skew of the mantle upwelling. “The mantle is moving differently from the plates, so it is having a strong influence on the reorganization of the plate boundary.

“When people have looked at these systems in the past, and they saw an area that is volcanically active and hydrothermally active, they assumed the magma supply is high and a lot is coming to the surface,” he said. “What our study shows is that the plumbing system, rather than the amount of available magma, is an important factor that controls eruptions. In other words, how magma evolves as it moves through the plumbing system controls whether or not it surfaces.”