Scientists: Achilles' Heel Of Antarctic Ice Shelves Is Beneath The Water, Accounting For 90% Loss In Some Areas 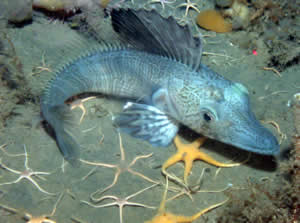 As an adaptation to low temperatures, the Antarctic ice fish has no red blood pigments (haemoglobine) and no red blood cells. 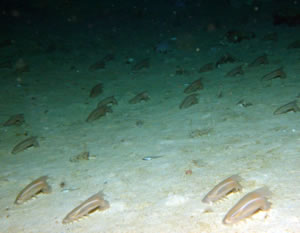 These deep-sea sea cucumbers are abundant in the Larsen B area. Interestingly they are all heading in the same direction. 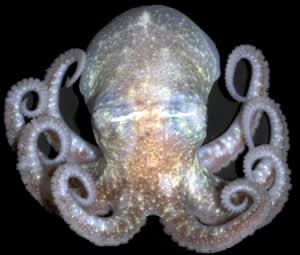 BREMERHAVEN, Germany -- Once roofed by ice for millennia, a 10,000 square km portion of the Antarctic seabed represents a true frontier, one of Earth’s most pristine marine ecosystems, made suddenly accessible to exploration by the collapse of the Larsen A and B ice shelves, 12 and five years ago respectively. Now it has yielded secrets to some 52 marine explorers who accomplished the seabed’s first comprehensive biological survey during a 10-week expedition aboard the German research vessel Polarstern.

While their families at home in 14 countries were enjoying New Year’s dinners, experts on the powerful icebreaking research ship were logging finds from icy waters as deep as 850 meters off the Antarctic Peninsula – an area rapidly changing in fundamental ways. The recent report of the Intergovernmental Panel on Climate Change shows nowhere on Earth warming more quickly than this corner of Antarctica, a continent 1.5 times the size of continental USA.

The expedition forms part of the Census of Antarctic Marine Life (http://www.caml.aq), which has 13 upcoming voyages scheduled during International Polar Year, to be launched in Paris March 1. A project of the global Census of Marine Life (http://www.coml.org) collaboration, CAML is responsible for the synthesis of taxonomic data and supports the efforts of national programs the world over.

Says CAML leader Michael Stoddart of Australia: “What we learned from the Polarstern expedition is the tip of an iceberg, so to speak. Insights from this and CAML’s upcoming International Polar Year voyages will shed light on how climate variations affect ice-affiliated species living in this region.”

Leaving South Africa Nov 23, the research icebreaker Polarstern operated by the Alfred Wegener Institute for Polar and Marine Research criss-crossed the northwest Weddell Sea. The cruise included the Larsen A and B zones, an area about the size of Jamaica (or half the size of New Jersey, a third the size of Belgium. The voyage ended Jan. 30.

With sophisticated sampling and observation gear, including a camera-equipped, remotely-operated vehicle, experts on the Polarstern have returned with revealing photography of life on a seabed uncapped by the disintegration of Larsen A and B. The expedition uncovered a wealth of new insights and brilliant images of unfamiliar creatures among an estimated 1,000 species collected, several of which may prove new to science.

The Polarstern’s mission included charting the environmental impact of history’s largest known ice shelf collapses. Polarstern’s team set out to find what indigenous forms of marine life existed under Larsen A and B, and what new organisms now are opportunistically moving in, redefining the ecosystem.

“The breakup of these ice shelves opened up huge, near pristine portions of the ocean floor, sealed off from above for at least 5,000 years, and possibly up to 12,000 years in the case of Larsen B,” says Julian Gutt, a marine ecologist at Germany’s Alfred Wegener Institute for Polar and Marine Research and chief scientist on the Polarstern expedition.

“The collapse of the Larsen shelves may tell us about impacts of climate-induced changes on marine biodiversity and the functioning of the ecosystem. Until now, scientists have glimpsed life under Antarctica’s ice shelves only through drill holes. We were in the unique position to sample wherever we wanted in a marine ecosystem considered one of the least disturbed by humankind anywhere on the planet.”

“This knowledge of biodiversity is fundamental to understanding ecosystem functioning,” he adds. “The results of our efforts will advance our ability to predict the future of our biosphere in a changing environment.”

When Antarctic glaciers reach the coast of the continent, they begin to float and become ice shelves, from which icebergs calve. Since 1974, a total of 13,500 square km of ice shelves have disintegrated in the Antarctic Peninsula, a phenomenon linked to regional temperature increases in the past 50 years. Growing numbers of scientists worry that similar break-ups in other areas could lead to increases in ice flow and cause sea levels to rise.

Larsen zone seafloor sediments were extremely varied, ranging from bedrock to pure mud. As a result, animals living on the sediment (epifauna) were highly varied as well, though far less abundant in the Larsen A and B areas – perhaps only 1% animal abundance compared to sea beds in the eastern part of the Weddell Sea.

In the relatively shallow waters of the Larsen zone, scientists were intrigued to find abundant deep sea lilies (members of a group called crinoids) and their relatives, sea cucumbers and sea urchins.

These species are more commonly found around 2,000 meters or so, able to adapt to life where resources far more scarce – conditions similar to those under an ice shelf.

Apparent newcomers found colonizing the Larsen zone include fast-growing, gelatinous sea squirts. The scientists found dense patches of sea squirts and say they were likely able to colonize the Larsen B area only after ice shelf broke in 2002.

Very slow-growing animals called glass sponges were discovered, with greatest densities in the Larsen A area, where life forms have had seven more years to re-colonize than Larsen B. The high number of juvenile forms of glass sponges observed probably indicates shifting species composition and abundance in the past 12 years.

Biodiversity in the Antarctic Peninsula

Among many hundreds of animal specimens collected on the voyage:

Extensive analyses will be conducted to prove whether or not candidate specimens are in fact new species. Confirmed new species will be logged in the Census of Marine Life OBIS (Ocean Biogeographic Information System) database and its Antarctic component SCAR-MarBIN (the Marine Biodiversity Information Network), which to date has recorded some 5,957 marine life forms, with an estimated 5,000 to 11,000 species yet to be discovered.

The remotely operated vehicle (ROV) used on Polarstern revealed less scouring damage than anticipated from icebergs that broke away from the Larsen shelves. In shallower depths to about 220 metres, the scientists found considerable richness of species variety.

“Iceberg disturbance was much more obvious north of the Larsen A and B areas where icebergs more typically run aground,” says Dr. Gutt. “In those outer areas, at depths of roughly 100 meters, we observed fresh ice scour marks everywhere and early stages of marine life re-colonization but no mature community. At around 200 meters depth we discovered a mosaic of life in different stages of re-colonization.”

A potentially far-reaching find by the Polarstern ROV: small clusters of dead clamshells littering an area on the dark ocean floor and pointing to the presence of a very rare “cold seep” – essentially a sea floor vent spewing methane and sulphide. Seeps can create a temporary habitat for animal life in otherwise barren, inhospitable terrain for many years before extinguishing, abruptly starving off the community.

The first-ever cold vent on Antarctica’s continental shelf was discovered at roughly 830 metres depth two years ago by a U.S. research team. The ROV located it and sampled the soil sediments, the first analysis of which revealed concentrated methane and sulphide. Clamshells found will be studied to determine their age and the life span of the colony.

In all, some 700 and 8,000 nautical miles were dedicated by the Polarstern and its helicopter crews respectively to recording the presence and behavious of marine mammals, which included Minke whales close to the pack ice edge and very rare beaked whale species near Elephant Island.

“It was surprising how fast such a new habitat was used and colonized by Minke whales in considerable densities,” says specialist Dr. Meike Scheidat of Germany. “They indicate that the ecosystem in the water column changed considerably.”

Fisheries investigations were carried out at islands west and north of the Antarctic Peninsula. The results of 85 hauls over 19 days show the biomass of two Antarctic cod species has increased since a survey in 2003 while stocks of Blackfin and Mackerel Icefish has decreased. The results will contribute to fish stock monitoring and assessment ongoing under the Convention on the Conservation of Antarctic Marine Living Resources (http://www.ccamlr.org).

Preliminary findings from the voyage will be confirmed by detailed analysis at the scientists’ home institutes over the next few years.

According to Dr. Stoddart, a significant consequence in the Antarctic Peninsula of rising temperatures is the slow decrease of sea ice and of the planktonic algae that grows underneath. These algae feeds krill, small shrimp-like creatures, and therefore represents the bottom rung on a marine food chain that eventually sustains the iconic large Antarctic species: penguins, whales and seals. An adult blue whale alone eats about 4 million individual krill per day.

“Algae is a source of abundant, high-quality winter food and is utterly central to the health of the whole ecosystem,” says Dr. Stoddart, adding that recent research by colleagues from the U.K. shows krill stocks decreasing significantly around the Antarctic Peninsula.

However, cautions Dr. Gutt: “Predicting the future of higher levels in the food chain, e.g. animals living at the sea-floor or fish, is very difficult. It is for example clear that in the Larsen zone a major biodiversity shift will happen and the unique under-ice shelf system will disappear in this limited area, but we have to analyze carefully our raw data to provide, as a first step, a basis for such predictions. Besides modeling, further observations and ecological field studies are necessary.”

“This is virgin geography. If we don’t find out what this area is like now following the collapse of the ice shelf, and what species are there, we won’t have any basis to know in 20 years’ time what has changed, and how global warming has altered the marine ecosystem,” says Gauthier Chapelle, outreach officer for the expedition and biologist at the Brussels-based International Polar Foundation.

Says Tarik Chekchak, Program Manager of the Cousteau Society: “The Southern Ocean spans 35 million square km – 10% of Earth’s ocean surface, and ice shelves cover 1.5 million square km of it. When Captain Cousteau explored Antarctica aboard the Calypso in 1972-73, the Larsen B ice shelf was 3,250 square km bigger and krill abundance in the Peninsula was much higher than today. The annual local temperature has risen 2.5 Â°C since the 1940’s.

“Impacts of these changes on the Southern Ocean ecosystem are substantial. Interplay between ocean circulation, sea ice extent, ice shelf cover and the iceberg’s mechanical action on the sea bed seem to determine the characteristics of some key planktonic and benthic communities. In a changing environment, the results of the CAML efforts are key to advancing our ability to understand our biosphere, inform public debate and allow decision-makers to lead us into a more sustainable future.”