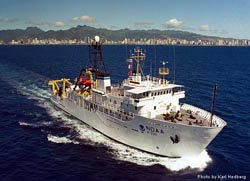 HONOLULU, Hawaii -- As part of the international Census of Marine Life (CoML), a team of world renown scientists will embark on an expedition to explore coral reef biodiversity in the largest fully protected marine area in the world--the Northwestern Hawaiian Islands Marine National Monument. Led by the National Oceanic and Atmospheric Administration (NOAA) Pacific Islands Fisheries Science Center, with funding from NOAA's Coral Reef Conservation Program and the Alfred P. Sloan Foundation, this 23-day research cruise to the Monument's French Frigate Shoals will be the first in a series of surveys by CoML's Census of Coral Reef Ecosystems (CReefs) project. The CoML projects are designed to assess the diversity, distribution and abundance of ocean life and explain how it changes over time. This CReefs project will provide needed baseline information and foster understanding of coral reef ecosystems globally. The cruise will take place on the NOAA ship Oscar Elton Sette and depart from Honolulu's Snug Harbor on Friday, October 6th.

According to NOAA's Dr. Russell Brainard, chief scientist for the expedition, this pioneering effort is unprecedented in the level of taxonomic expertise. While annual reef assessment and monitoring program surveys are conducted throughout the Northwestern Hawaiian Islands (NWHI), those surveys have been forced to focus on the larger and better understood fish, corals, macroalgae and macroinvertebrates (lobsters, large crabs, sea urchins). This expedition is unique in focusing primarily on the more cryptic small invertebrates (tiny crabs, mollusks, sea slugs, worms and more), algae, and microbes over a range of habitats at French Frigate Shoals. Although some of these smaller organisms may not be as charismatic as monk seals, or colorful aquarium fish (until you look under a microscope), they form the complex tapestry that supports the existence of the larger animals, and changes in their abundance or diversity are often the first indicators of environmental impacts or changes. These groups of organisms are also the least understood, and many new species records for the NWHI, as well as the discovery of new species are likely during this expedition.

Department of Land and Natural Resources, Aquatic Resources Division Administrator Dr. Dan Polhemus, summarized the need for this type of survey in saying "we cannot properly manage what we don't know we have." Don Palawski, Refuge Manager for the Pacific Remote Islands National Wildlife Refuge Complex under the U.S. Fish and Wildlife Service (USFWS) stated that the biodiversity surveys being conducted during this expedition are "one of the priorities for conserving all the monument's natural resources."

The taxonomists, biologists specializing in the classification of these organisms, are donating their time and considerable expertise. "We plan to provide for the State of Hawaii a baseline record of the diversity of a relatively pristine area in order to have some basic working knowledge of what lives in the NWHI chain. There will never be any way to measure impact on the environment without first knowing what is there" said Dr. Joel Martin, Chief of the Division of Invertebrate Studies and Curator of Crustacea, Natural History Museum of Los Angeles County.

Coral reefs are highly threatened repositories of extraordinary biodiversity and therefore have been called "the rainforests of the sea", but little is known about the ocean's diversity as compared to its terrestrial counterpart.

According to Dr. Nancy Knowlton of Scripps Institution of Oceanography at UC San Diego, CReefs lead principal investigator, "We don't even know to the nearest order of magnitude the number of species living in the coral reefs around the globe. Our best guess is somewhere between 1 and 9 million species based on comparisons with the diversity found in rainforests and a partial count of organisms living in a tropical aquarium."