Scientists: Wind Is The Force Behind Fish Booms And Busts; 'Fluctuations Can Be Explained By Natural Phenomena' 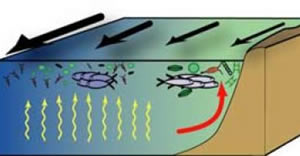 Conceptual diagram depicts wind (black arrows) as the driving force behind upwelling (yellow and red arrows), which brings plankton to the surface 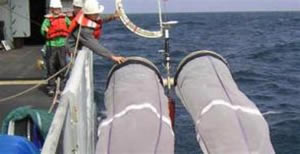 The mid-20th century crash of the sardine fishery off California for decades has vexed marine ecologists searching for the root causes of large fluctuations in the sardine population. Before its collapse, the fishery was one of the world’s most productive and formed the setting of John Steinbeck’s “Cannery Row” in Monterey, Calif.

Scientists at Scripps Institution of Oceanography at UC San Diego have now shed light on the puzzle by proposing a plausible mechanism behind the mystery: wind.

Writing in the online early edition of the Proceedings of the National Academy of Sciences, Scripps researchers Ryan Rykaczewski and David Checkley propose that atmospheric wind forces can determine the availability of microscopic organisms that sardine and anchovy feed upon. When wind causes nutrient-rich waters to rise to the surface, plankton levels increase and sardine populations flourish. Conversely, sardine numbers crash when plankton become scarce as wind conditions change.

The scientists say their findings may explain the sardine and anchovy booms and busts off California’s coast and could explain similar population cycles elsewhere around the world.

“This paper is the first to show a mechanistic relationship between climate variability and the sardine fishery,” said Rykaczewski, a Scripps graduate student researcher. “There have been a lot of hypotheses about climate change and sardine and anchovy fisheries, but there has been little scientific support for a mechanism connecting changes in climate to changes in these fish populations.”

After a sardine collapse that began in the late 1940s, scientists sought a greater ecological understanding of the California Current, the eastern portion of the clockwise circulation of the North Pacific Ocean that flows off California’s coast. This need led to the 1949 launch of the California Cooperative Oceanic Fisheries Investigations (CalCOFI), a unique ocean dynamics monitoring program initiated by Scripps Institution, the California Department of Fish and Game and the National Oceanic and Atmospheric Administration’s National Marine Fisheries Service, which continues today.

The 50-plus years of CalCOFI data were key to Rykaczewski and Checkley’s scientific breakthrough. In addition, research cruises conducted in association with the California Current Ecosystem Long-Term Ecological Research Program allowed the scientists to take a closer look at the relationship between plankton and winds. Rykaczewski also worked with Scripps climate researcher Masao Kanamitsu to compare historic ocean wind patterns with ecological data.

“That’s the key,” said Checkley a Scripps professor. “The rate at which water moves vertically influences the structure of the marine ecosystems out there. That’s the seminal part of this theory.”

Rykaczewski and Checkley determined that two atmospheric conditions were the main drivers: “coastal upwelling,” in which wind forces a rapid rise in cold, nutrient-rich waters from the ocean depths; and a comparable process called “wind-stress curl upwelling” that occurs offshore in the open ocean.

In both cases, the wind drives upwelling, which supplies the surface ocean with the nutrients necessary to support plankton and fish populations. In the coastal zone, rapid upwelling supports the largest zooplankton, which are the favored prey of anchovies, which possess coarse gill “rakers”—akin to a mesh filtering mechanism—for consuming plankton. In the open ocean, slower but more extensive upwelling sustains a much smaller class of zooplankton, suitable for sardines and their comparatively fine gill rakers.

The scientists say their research suggests that sardines and anchovies do not compete against one another, but rather each takes advantage of the zooplankton available as the climate and winds change.

“This research furthers the idea that fluctuations can be explained by natural phenomena as opposed to fishing exclusively,” said Checkley. “I think there’s no question that both fishing and natural forcing are responsible for the historical fluctuations in fish not only off California, but off Peru, Japan, South Africa and Spain. It’s important to realize that nature is a large player in this equation, if not the dominant one.”

Rykaczewski and Checkley say the new study could be important for fisheries management by paving the way for a new approach of predicting fish populations using climate change and wind factors.