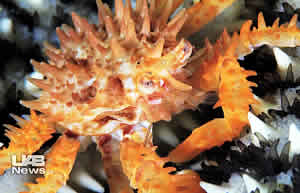 King crabs are marching up the Antarctic slope. credit UAB

BIRMINGHAM, Alabama -- It's like a scene out of a sci-fi movie â thousands, possibly millions, of king crabs are marching through icy deep-sea waters and up the Antarctic slope.

"They are coming from the deep, somewhere between 6,000 to 9,000 feet down," said James McClintock, Ph.D., University of Alabama at Birmingham Endowed Professor of Polar and Marine Biology.

Shell-crushing crabs haven't been in Antarctica, the Earth's southernmost continent, for hundreds or thousands, if not millions, of years, McClintock said. "They have trouble regulating magnesium ions in their body fluids and get kind of drunk at low temperatures."

But something has changed, and these crustaceans are poised to move by the droves up the slope and onto the shelf that surrounds Antarctica. McClintock and other marine researchers interested in the continent are sounding alarms because the vulnerable ecosystem could be wiped out, he said.

Antarctic clams, snails and brittle stars, because of adaptation to their environment, have soft shells and have never had to fight shell-crushing predators. "You can take an Antarctic clam and crush it with your hands," McClintock said. They could be the main prey for these crabs, he said.

Loss of unique mollusks could jeopardize organisms with disease-fighting compounds, McClintock said. Sea squirts, for example, produce an agent that fights skin cancer. If the crabs eat them, it could bring McClintock's research with that organism to a halt.

McClintock's chemical ecology program has published more than 100 papers on species researchers have discovered, including the compound that combats skin cancer and one to treat flu, that are being explored by drug companies.

"I am very concerned that species could disappear, and we could lose a cure to a disease," he said.

McClintock's colleague Sven Thatje, Ph.D., an evolutionary biologist at the University of Southampton in England, saw the first signs of the king crab invasion in 2007. He spotted a lone crab climbing up the slope. McClintock and Rich Aronson, Ph.D., a paleoecologist at the Florida Institute of Technology, put together a proposal to launch the first systematic search for king crabs in Antarctica. With Thatje as chief expedition scientist, the team headed back with two ships and a submarine earlier this year.

"We ran transects up the slope and discovered hundreds and hundreds of king crabs, which could translate into millions across broad expanses of coastal Antarctica," he said. "They are adults, males and females. They appear healthy and have all the ingredients needed to produce a healthy population."

The king crabs' large numbers on the slope suggest that they are increasing in number at a rate faster than anticipated, McClintock said. "Before long, they could be in shallow water and on the shelf," he said. "This is a very visual, visceral way of thinking of an impact of climate change."

McClintock and his fellow researchers are exploring causes for the invasion, which they believe is linked to human-induced climate warming. Around 40,000 tourists visit the area each year.

"Antarctica has become a popular destination for tourists," McClintock said. Cruise ship companies have seen it as an opportunity to take visitors to "one of the most stunningly beautiful areas on our planet."

After cruising along the waters, tourists can then take a rubber boat called a zodiac to a beach covered with penguins as far as the eye can see. "The penguins will come right up to you," McClintock said.

And, now that the king crabs are on the Antarctic slope, some fishermen are anxious to head to Antarctica as well. McClintock has already gotten an email from a fisherman asking when he can come.

But the icy waters and dangerous logistics make fishing difficult, McClintock said. "There is a TV show called the 'The Deadliest Catch,'" he said. "Well this is the deadliest, deadliest catch."

For now, McClintock and his team are reviewing the thousands of images they captured during their submarine exploration. His team is analyzing the data and plans to have its findings published in a major journal within a year.

"The whole ecosystem could change," McClintock said. "And this is just one example of a species expanding its range into a new territory. There will certainly be more as the climate warms up."