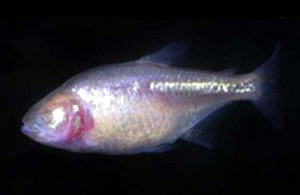 ATLANTA, Georgia -- A blind fish that has evolved a unique technique for sensing motion may inspire a new generation of sensors that perform better than current active sonar.

Although members of the fish species Astyanax fasciatus cannot see, they sense their environment and the movement of water around them with gel-covered hairs that extend from their bodies. Their ability to detect underwater objects and navigate through their lightless environment inspired a group of researchers to mimic the hairs of these blind cavefish in the laboratory.

While the fish use these hairs to detect obstacles, avoid predators and localize prey, researchers believe the engineered sensors they are developing could have a variety of underwater applications, such as port security, surveillance, early tsunami detection, autonomous oil rig inspection, autonomous underwater vehicle navigation, and marine research.

“These hair cells are like well-engineered mechanical sensors, similar to those that we use for balance and hearing in the human ear, where the deflection of the jelly-encapsulated hair cell measures important flow information,” said Vladimir Tsukruk, a professor in the Georgia Tech School of Materials Science and Engineering. “The hairs are better than active sonar, which requires a lot of space, sends out strong acoustic signals that can have a detrimental effect on the environment, and is inappropriate for stealth applications.”

In a presentation on March 20 at the American Physical Society meeting, researchers from Georgia Tech described their engineered motion detector that mimics the underwater flow measurements made by the blind cavefish. This research was sponsored by the Defense Advanced Research Projects Agency (DARPA).

Tsukruk and graduate students Michael McConney and Kyle Anderson conducted preliminary experiments with a simple artificial hair cell microsensor made of SU-8, a common epoxy-based polymer capable of solidifying, and built with conventional CMOS microfabrication technology. They found that the cell by itself could not achieve the high sensitivity or long-range detection of hydrodynamic disturbances created by moving or stationary bodies in a flow field. The hair cell needed the gel-like capsule – called the cupula – to overcome these challenges.

“After covering the hair cell with synthetic cupula, our bio-inspired microsensor had the ability to detect flow better than the blind fish. The fish can detect flow slower than 100 micrometers per second, but our system demonstrated flow detection of several micrometers per second,” said Tsukruk, who also holds an appointment in Georgia Tech’s School of Polymer, Textile and Fiber Engineering. “Adding the cupula allowed us to detect a much smaller amount of flow and expand the dynamic range because it suppressed the background noise.”

In addition, the hydrogel encapsulation protects the sensors and increases their ability to withstand deformation due to impact. It also helps the hairs better withstand the marine environment by resisting corrosion and microorganism growth.

Before the research team began synthesizing the gel-like material in the laboratory, they used optical microscopy and confocal fluorescence microscopy to determine the size, shape and properties of real cavefish cupula. One type of cupula they found was cylindrical-shaped, with a height approximately five times larger than its diameter. The tallest part of the cupula was far enough away from the surface that it was exposed to free-flowing water and could bend with the hair to detect changes in flow.

To create the synthetic cupula in the laboratory, McConney dropped a solution of poly(ethylene glycol) tetraacrylate dissolved in methanol directly on the hair flow sensor. Once the droplet dried, he lowered another droplet until it made contact with the last drop and continued adding droplets until he constructed a tall hydrogel structure. Once the entire cupula structure dried, McConney exposed it to ultraviolet light to crosslink it, forming a three-dimensional network.

“This method of adding one droplet at a time allowed us to control the width and height of the cupula and the distance from the bottom of the cupula to the base of the hair,” said McConney.

While the researchers found that placing the synthetic cupula closest to the sensor platform enhanced the durability and lifetime of the capsule, they captured the best flow measurements when the cupula structure started halfway up the hair and extended past the hair by 50 percent.

To date, the researchers have fabricated an array of eight microsensors and shown that the array is able to detect an oscillating object underwater. They are currently looking for industrial partners to efficiently scale-up the research by fabricating arrays of thousands of these sensors and testing them in real marine environments.

Cheryl Coombs from Bowling Green State University and Chang Liu from the University of Illinois also contributed to this research.