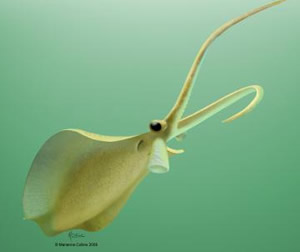 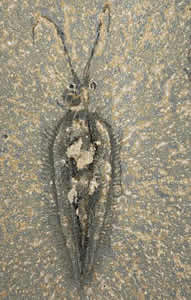 This is a Nectocaris pteryx from the Middle Cambrian Burgess Shale. Credit: Jean-Bernard Caron

TORONTO, Ontario -- A study by researchers at the University of Toronto and the Royal Ontario Museum sheds new light on a previously unclassifiable 500 million-year-old squid-like carnivore known as Nectocaris pteryx.

"We think that this extremely rare creature is an early ancestor of squids, octopuses, and other cephalopods", says Martin Smith of U of T's Department of Ecology and Evolutionary Biology (EEB) and the Department of Natural History at the ROM. "This is significant because it means that primitive cephalopods were around much earlier than we thought, and offers a reinterpretation of the long-held origins of this important group of marine animals."

The new interpretation became possible with the discovery of 91 new fossils that were collected by the ROM from the famous Burgess Shale site (Yoho National Park) in the UNESCO World Heritage Canadian Rocky Mountain Parks, British Columbia over the past three decades, and examined by PhD student Martin Smith along with U of T EEB and Geology assistant professor and ROM palaeontologist Jean-Bernard Caron.

"Previously, all knowledge of Nectocaris came from a lone specimen described in 1976. Due to the ambiguous characteristics evident on that specimen, Nectocaris has remained unclassified until now," says Smith, lead author of the study published this week in Nature. "Our study reveals that Nectocaris is similar to known members of the modern cephalopod group, which includes squid, octopus, cuttlefish and the nautilus, as well as common fossils such as ammonites and belemnites, which are now extinct."

"We know very little about the relationships between the major groups of molluscs, and the early history of the group," says Smith. "Fossils like Nectocaris help us to map out how the groups alive today might be related, and how they evolved. This tells us something about how biodiversity originated in the past, and helps us to understand the rich tapestry of life today."

The new specimens, between two and five centimetres long, show that Nectocaris was kite-shaped and flattened from top to bottom, with large, stalked eyes and a long pair of grasping tentacles, which the researchers believe helped it to hunt for and consume prey. Smith and Caron further suggest that the creature swum using its large lateral fins, and, like modern cephalopods, probably used its nozzle-like funnel to accelerate by jet propulsion. "Some of the specimens' large gills were choked with mud, suggesting that the animals were fossilized after being caught in an underwater mud-flow," says Smith.

"Our findings mean that cephalopods originated 30 million years earlier than we thought, and much closer to the first appearance of complex animals in the 'Cambrian explosion'" says Smith. Nectocaris does not have a mineralized shell, a fact that surprised the scientists. "It's long been thought that cephalopods evolved in the Late Cambrian period, when gradual modifications to the shells of creeping, snail-like animals made them able to float. Nectocaris shows us that the first cephalopods actually started swimming without the aid of gas-filled shells. Shells evolved much later, probably in response to increased levels of competition and predation in the Late Cambrian."

"Modern cephalopods are very complex, with intricate organs and startling intelligence. We go from very simple pre-Cambrian life-forms to something as complex as a cephalopod in the geological blink of an eye, which illustrates just how quickly evolution can produce complexity."

Smith says Nectocaris proves that there are still surprises in the fossil record. "Fossils can only ever tell us a part of the story," he says. "Exceptional soft-bodied fossils such as Nectocaris, combined with advances in developmental and molecular biology, still have a lot to bring to the table, and I'm sure that they will continue to help to refine and replace our current hypotheses."