Study: Arabian Sea Tropical Cyclones Are Intensified By Air Pollution; 'There Has Been A Real Uptick' 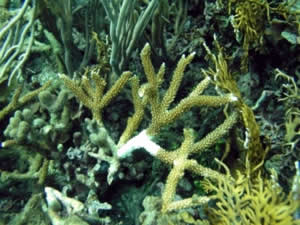 BOSTON, Massachusetts -- In recent years, tropical coral reefs have become drastically altered by disease epidemics. In a new study published by PLoS ONE, lead author Steven V. Vollmer, assistant professor of biology at the Marine Science Center at Northeastern University, finds that acroporid corals listed on the US Endangered Species List due to epidemics of White Band Disease can recover because up to six percent of the remaining corals are naturally resistant to the disease. This is the first evidence of natural disease resistance in tropical reef corals.

The Carribean-wide mass die-offs of acroporid corals and urchins have been major contributors to the rapid decline of coral reefs. Reef-building corals have generally been susceptible to the global rise in marine diseases. As foundation species on tropical reefs, the impacts of White Band Disease (WBD) and other coral diseases have rippled throughout the ecosystem. Recuperation of these formerly dominant corals has been slow.

Despite its extreme impacts, much about the causes and ecology of WBD remains poorly understood.

“Understanding disease resistance in these corals is a critical link to restoring populations of these once prevailing corals throughout their habitat,” said Vollmer. “Our study has shown that there are disease resistant corals, which means that these corals and thus the shallow water reefs of the Caribbean can be recovered.”

The study, titled “Natural Disease Resistance in Threatened Staghorn Corals” examines the potential for natural resistance to WBD in the staghorn coral. Using genotype information and field monitoring of WBD, the study found that six percent of staghorn coral genotypes are naturally resistant to WBD.

These resistant staghorn coral strains might explain why pockets of coral have been able to survive the WBD epidemic. Identifying, protecting and farming these disease resistant corals provides a clear avenue to recover these corals.