Scientists Calculate The Role Of Swimmers In Ocean Mixing; 'We're Trying To Remain Agnostic About The Role Of Marine Life'‎ 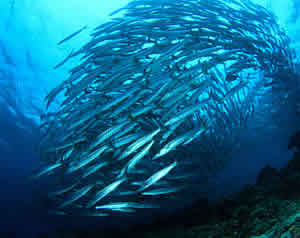 Studying ocean mixing may help scientists understand why fish confined in fish farms and ocean aquaculture are at risk for bacterial infections.

MADISON, Wisconsin -- The world's oceans, we know, are constantly shaken and stirred by the winds and the tides and other physical forces of nature.

But what about fish and other swimming marine life? Do they stir the ocean, too?

Since the question was first posed by pioneering oceanographer Walter Munk in 1966, some rough "top down" calculations have emerged suggesting that marine swimmers â everything from whales to krill â could contribute a significant portion of the mechanical energy for all ocean mixing. The simple math: total the mechanical energy of all the estimated marine swimmers in all the world's oceans and you get a figure that suggests as much as a third of all the vertical mixing in the world's oceans is produced by marine life.

Another and perhaps more precise way to approach the problem is to model the influence of a single swimmer on a fluid particle and multiply. That is the approach described this week in the journal Physics Letters A by mathematicians Jean-Luc Thiffeault of the University of Wisconsin-Madison and Stephen Childress of New York University.

"The method we use is essentially the one Einstein applied to Brownian motion in his famous 1905 paper," notes Thiffeault. "Many small kicks due to passing swimmers cause a parcel of water to undergo a kind of drunkard's random walk."

While the problem may seem arcane, it assumes real importance in settings like fish farms and ocean aquaculture where large concentrations of confined fish can be at risk from bacterial infections caused by microbes that, in the open, mixed ocean, wouldn't be an issue.

"Oceanographers want to know how things mix vertically in the ocean," says Thiffeault, explaining that the ocean is like a layer cake, with tiers of water from top to bottom that have different temperatures and concentrations of nutrients, such as iron.

"Because of the ocean's stratification, water doesn't want to move vertically, but it eventually must, otherwise there would be no life on earth," says Thiffeault. "This is called vertical transport. The question is where does it come from?"

In their study, funded by the National Science Foundation and the Office of Naval Research, Thiffeault and Childress examine the role of swimming marine life by simplifying things a bit and assuming that an individual swimmer will come in the shape of a sphere or cylinder. The effect of the swimming object on a particle of water is then calculated as it passes by.

"Our initial model is really too simple," says Thiffeault. "The numbers we're getting are very small in the open ocean, where there isn't a high density of marine life."

But the numbers go up when other factors are woven into the equation. For example, a single krill may not have much effect, but the tiny crustaceans are never alone. They gather in large, sometimes massive concentrations. And many marine swimmers, jellyfish, for example, also drag water with them when they swim, a phenomenon that could amplify the effect of the swimmer.

The model constructed by the two mathematicians in their Physics Letters A report is far from complete. Such things as viscosity, wakes, schooling, boundary layers and, most importantly for applying the model to ocean mixing, buoyancy and stratification effects, still need to be built in to the model.

Stratification, for example, becomes important in the mixing equation as water is moved up or down by a swimmer: "If water dragged upwards by an organism doesn't warm up, it will sink again" and negate the potential mixing effect of the swimmer, Thiffeault explains.

According to Thiffeault, there are two camps on the influence of marine swimmers: those who believe they have a significant effect on ocean mixing and those who discount the idea.

"We're trying to remain agnostic about the role of marine life in ocean mixing, but as a mechanism it could be applied to many other problems such as sedimentation. In one direction or another, it should be an interesting result."