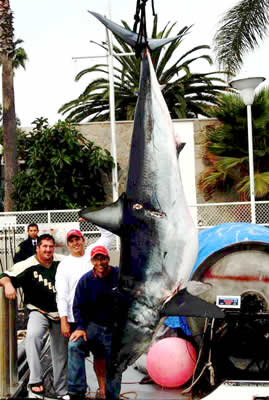 A 13-foot, 1,175-pound shortfin mako shark dwarfs the anglers who caught it on Sept. 30 near Catalina Island.

LOS ANGELES, California -- When Chris Podesto hooked into a huge shortfin mako shark off Catalina Island he watched in awe as the powerful gamefish ran and jumped wildly like nothing he's ever seen in his life.

The 13-foot mako was leaping 30 feet in the air and making 300-yard surges, towing a 27-foot fishing boat around like a toy.

The shark, with its dagger-like teeth and nasty disposition, already had attacked the boat once, biting its 150 horsepower outboard motor as if it were an hors d'ouevre. What would it do next, jump into the boat and toss its occupants into the water?

"Realizing I hooked this monster was pretty daunting," Podesto said. "I've never seen an animal that big, just a few feet away from me. The shark came without warning, lifted its head out of the water and chewed on the motor, like a scene out of the movie 'Jaws.' But, in our case, it was a real shark attack."

Podesto had yearned to catch a mako and contacted Scott Gurney, a friend who produces the television series "Shark Hunter" on Versus network, to take him out. They left the dock Sept. 30 on a warm, sunny day and fished about a mile offshore. After a couple of hours, they hadn't had a bite, before Podesto sighted a small mako, perhaps weighing 70 pounds, that was attracted to their chum - a mixture of ground tuna and pig blood - that was poured overboard.

Just when Podesto hooked the tiny mako on a black bass rod, the granddaddy of all makos ever caught off the California coast suddenly appeared and chomped down on the motor.

"I started yelling for a rod to catch the big mako and tossed out a piece of tuna on a circle hook," Podesto said. "The hook was attached to 300-pound cable leader that was backed by 100-pound monafilament line."

But the huge shark didn't bite. Instead, it disappeared for about 10 minutes, before all heck broke loose.

Podesto had decided to switch to a larger bait when he felt a slight tap. Then, his rod bent double as the 1,175-pound shark smashed the offering that dangled 30 feet behind the boat.

"The mako ran and ran, and appeared more like a submarine than a fish," Podesto said. "When I felt strong head shakes and an acceleration of line peeling off the reel, I knew it would jump high into the air, with an explosiveness that sent shock waves through all of us."

The battle would last 10 hours, from about noon to 10 p.m. As darkness fell, the anglers almost gave up the fight.

"This is way too dangerous to attempt to gaff after dark," he said. "I've never caught a fish like this at night."

Podesto wouldn't hear of it.

"I wasn't going to cut the line and didn't care how long it took to reel the shark in," he said.

Two additional hours passed before Podesto finally guided the shark next to the boat, where the crew got a tail wrap on the beast and tied it to the side. By then it was 2 a.m. It was bitter cold for the anglers, who wore little more than Bermuda shorts.

"It was a magnificent experience on one hand and horrible on the other," Podesto said.

Forced to motor very slowly, they got back to port at 6 a.m. and knew they had shattered the record for mako shark caught on a rod and reel off California. The old standard - 986 pounds - was set in September 1999 off Santa Barbara Island.

Later, Podesto was surprised his mako would not be recognized as the official state record because he let his friend hold the rod for two hours out of a 10-hour struggle.

"Fish and Game's ruling doesn't take away from the fact I caught the largest mako ever in California waters," Podesto said. "Truth is, I get more satisfaction out of that than seeing my name in some record book."

Podesto's catch fell just short of the 1,221-pound all-tackle IGFA record caught in July 2006 off Chatham, Mass. The largest mako ever weighed was a 1,530-pounder that was harpooned in July 1997 off Plymouth, Mass.

If Podesto's mako had been feeding before it was hooked, he might have set an all-time standard.

"When we checked its stomach contents, it was almost empty except for the remains of a digested porpoise," he said. "The way I figure it, I was one sea lion away from number one in the world."

The mako was donated to the Emergency Food Bank in Los Angeles, but Podesto was careful to take precise measurements of the length, girth, fins and teeth.

He expects to get a life-sized plastic mount of his prize. The only problem he faces is finding a room at his house that is large enough to hang it.