Research: Pterygotid Sea Scorpions Not The Terror Of Ancient Seas

Researchers: Seas Could Rise Dramatically in Rapid Ice Melt; 'What We are Doing is Irreversible' 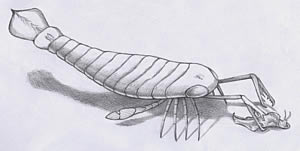 BUFFALO, New York -- Experiments by a team of researchers in New York and New Jersey have generated evidence that questions the common belief that the pterygotid eurypterids ("sea scorpions") were high-level predators in the Paleozoic oceans. This group, which ranged the seas from about 470 to 370 million years ago (long before the dinosaurs appeared), included the largest and, arguably, scariest-looking arthropods known to have evolved on planet Earth. Reaching lengths of 2 Â½ meters with a body supported by well-developed legs, and armed with a pair of forward-facing claws laden with sharp projecting spines, they seem like the Tyrannosaurus rex among the invertebrates.

But in a new study, published in volume 39 of the Bulletin of the Buffalo Society of Natural Sciences, Richard Laub (Buffalo Museum of Science) and his colleagues Victor Tollerton (Research Associate, New York State Museum) and Richard Berkof (Stevens Institute of Technology) show that the mechanical constraints on the claw of the pterygotid sea scorpion Acutiramus made it incapable of penetrating the external shell of a medium-sized horseshoe crab without danger of rupturing. They suggest that these imposing sea scorpions, and by extension others of their family who lived in the seas about 470 to 370 million years ago, were not necessarily the voracious predators they are commonly believed to have been. The practical operational force that could be safely applied by the claw of Acutiramus without causing damage to it was no more than about 5 Newtons, whereas a force of 8-17 Newtons was required to penetrate the horseshoe crab's armor.

Laub's team also noted that the absence of an 'elbow joint' between the claws and the body of Acutiramus limited claw movement, making them more effective in grasping prey on the sea floor than capturing actively fleeing fish or other swimming animals. Armed with serrated spines, the claws may have been used together to both capture and shred the prey, but the predatory capabilities of Acutiramus would appear to lack the force necessary for this animal to operate as a major predator.

"I have long been suspicious of prevailing popular interpretations" said Dr. Roy Plotnick, Department of Earth and Environmental Sciences at the University of Illinois at Chicago, who was not involved in the study. "This is a welcome contribution that strongly supports an alternative interpretation of claw function" he said.

"Our results derail the image of these imposing-looking animals, the largest arthropods yet known to have existed, as fearsome predators, or at least as predators of other eurypterids and of the armored fishes of the time" said team leader Richard Laub, who noted that "it opens the possibility that they were scavengers or even vegetarians".