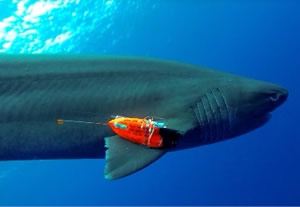 A sixgill shark with a combined sensor and video recorder attached to it swims through the ocean. Credit: Mark Royer/University of Hawaii

HONOLULU, Hawaii -- Instruments strapped onto and ingested by sharks are revealing novel insights into how one of the most feared and least understood ocean predators swims, eats and lives.

For the first time, researchers at the University of Hawaii and the University of Tokyo outfitted sharks with sophisticated sensors and video recorders to measure and see where they are going, how they are getting there, and what they are doing once they reach their destinations.

Scientists are also piloting a project using instruments ingested by sharks and other top ocean predators, like tuna, to gain new awareness into these animals' feeding habits. The instruments, which use electrical measurements to track ingestion and digestion of prey, can help researchers understand where, when and how much sharks and other predators are eating, and what they are feasting on.

The instruments are providing scientists with a "shark's eye" view of the ocean and greater understanding than ever before of the lives of these fish in their natural environment.

"What we are doing is really trying to fill out the detail of what their role is in the ocean," said Carl Meyer, an assistant researcher at the Hawaii Institute of Marine Biology at the University of Hawaii at Manoa. "It is all about getting a much deeper understanding of sharks' ecological role in the ocean, which is important to the health of the ocean and, by extension, to our own well-being."

Using the sensors and video recorders, the researchers captured unprecedented images of sharks of different species swimming in schools, interacting with other fish and moving in repetitive loops across the sea bed. They also found that sharks used powered swimming more often than a gliding motion to move through the ocean, contrary to what scientists had previously thought, and that deep-sea sharks swim in slow motion compared to shallow water species.

"These instrument packages are like flight data recorders for sharks," Meyer said. "They allow us to quantify a variety of different things that we haven't been able to quantify before."

"It has really drawn back the veil on what these animals do and answered some longstanding questions," he added.

Meyer and Kim Holland, a researcher also at the Hawaii Institute of Marine Biology, are presenting the new research today at the 2014 Ocean Sciences Meeting co-sponsored by the Association for the Sciences of Limnology and Oceanography, The Oceanography Society and the American Geophysical Union.

Sharks are at the top of the ocean food chain, Meyer noted, making them an important part of the marine ecosystem, and knowing more about these fish helps scientists better understand the flow of energy through the ocean. Until now, sharks have mainly been observed in captivity, and have been tracked only to see where they traveled.

These new observations could help shape conservation and resource management efforts, and inform public safety measures, Holland said. The instruments being used by scientists to study feeding habits could also have commercial uses, including for aquaculture, he added.