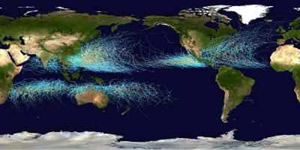 This is a map of the cumulative tracks of all tropical cyclones during the 1985-2005 time period. Credit: NASA

Tropical cyclones, the general name for a hurricane, typhoon, cyclone, tropical storm or tropical depression, form in different regions of the world at different times of the year. When the northern hemisphere hurricane season is active, the southern hemisphere is in winter-time, and vice-versa. So, when there's snow on the ground in the U.S., chances are the southern Indian Ocean or southern Pacific Ocean is dealing with a tropical cyclone.

Climatologist Bill Patzert from NASA's Jet Propulsion Laboratory (JPL), Pasadena, Calif. is one of many NASA researchers that utilize data from NASA satellites. Patzert said, "Born over the tropical oceans, tropical cyclones impact most of our planet's population. These great storms can devastate entire regions, but also supply precipitation that sustains industry, agriculture and great urban centers of today's civilizations." Patzert continued, "Hurricanes can be scary, but we should not forget that they are also an important part of our planet's heat and water balance. We can feel their violence, but they also give our home planet relatively stable and warm temperatures worldwide, transporting vast amounts of heat and energy out of the tropics into the northerly latitudes."

NASA has several satellites in orbit around the Earth that are used to study different aspects of these tropical cyclones, and NASA scientists conduct hurricane research all through the year. Satellites include the Tropical Rainfall Measuring Mission satellite (TRMM), Aqua, QuikScat, CloudSat, the Geostationary Operational Environmental Satellite (GOES), JASON-1, OSTM/Jason-2, Landsat, and Terra. Except for GOES, which is managed by the National Oceanic and Atmospheric Administration, all missions are managed either out of NASA Goddard or JPL. The GOES Project Office at NASA Goddard generates images and satellite animations.

Aqua and Terra have several instruments between them that are often featured on the hurricane page, the Atmospheric Infrared Sounder (AIRS), Advanced Microwave Scanning Radiometer-E (AMSR-E) and Moderate Imaging Spectroradiometer (MODIS). TRMM has the first and only precipitation radar in space and can provide stunning three-dimensional pictures of the structure of tropical cyclones.

Using all of these satellites and their instruments, NASA scientists gather data on many factors that determine why a tropical cyclone might have strengthened or weakened. Data includes: storm and surface winds; sea surface heights and temperatures; rainfall intensity and area; lightning; cloud water; water vapor; cloud heights, extent of cloud cover and cloud temperature, humidity, atmospheric pressure; cloud development; and size of the storm.

The National Oceanic and Atmospheric Administration's (NOAA) National Hurricane Center (NHC) and the Joint Typhoon Warning Center, both organizations that forecast hurricanes, also use data from these NASA satellites and instruments in their forecast decisions. The NASA Hurricane Page also has live alerts directly from the NHC, so readers can get the latest Atlantic Basin storm information immediately when it is issued.

Hurricane multimedia is also a big part of the web page. Included are stunning animations created at NASA Goddard's Scientific Visualization Studio with great educational value. They range from "What is a Hurricane," and "A Hurricane's Heat Engine" to "Arlene to Zeta: A Look at the 2005 Hurricane Season." The International Space Station and the space shuttle also provide storm photos.

Readers can receive breaking news with the new RSS feed or email subscription option for breaking news alerts. Twitter.com subscribers can also get the latest hurricane news on that site under "NASAHurricane."

NASA's Hurricane Web Page will continue to make NASA's unique data sets available to the global community of climate scientists; and hurricane researchers, forecasters and educators. "The intent is to increase the understanding of these powerful storms and to work with educators, climate researchers, and research and operational agencies worldwide to save lives, decrease property loss and, thus, improve the economic well being and safety of the billions of people living in the tropics," Patzert said.

"There's always a tropical cyclone brewing somewhere and NASA satellites and the NASA Hurricane page always have them in their sights," Gutro said.