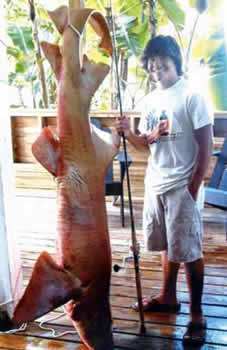 Nic Jeter stands by his world record 5-foot, 263.8-pound nurse shark that it took him around two hours to pull in.

When a 15-year-old Georgia high school freshman Nic Jeter went out fishing with his dad, Greg, on their 22-foot Pathfinder boat at Port St. Joe, Florida, Saturday, he had no idea he was about to have his name in the record book.

That is exactly what happened, however, when, after 45 minutes of fishing for Spanish mackerel, just off Cape San Blas, he felt a tug on his line. Little did he know that the instigator of that tug was a world record 5-foot, 263.8-pound nurse shark.

"We had caught about five or six Spanish mackerel and were about to pull anchor and come on back in when we felt something big bite our cut blue fish bait that we had on our Teamar Shimono 8000 reel with 30-pound test line," Nic Jeter said.

After Nic and his dad came back to shore, they took the shark to be weighed. Thinking it might be a record, they reported it to the International Game and Fish Association (IGFA) in Dania Beach, Fla., and they verified that it was a new world record catch.

Nic said that, while he has eaten shark before, he definitely plans to have this one mounted.

"We could say we are a fishing family because we all enjoy it so much. After Nic's prize catch, we went to the home of Jim's grandfather, former Decatur County Commissioner Jim Jeter, Saturday night to cook and eat fish.

Saturday's big catch was also not his first shark catch. He has caught nurse, bull and hammerhead sharks in the past.