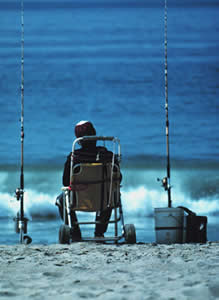 SILVER SPRING, Maryland -- NOAA is again surveying saltwater anglers across the nation to update and improve estimates of the overall economic contributions of saltwater recreational fishing to the U.S. economy.

"The money that millions of recreational anglers spend on fishing trips each year produces tens of thousands of jobs and billions in sales revenue," said Jane Lubchenco, Ph.D, under secretary of commerce for oceans and atmosphere and NOAA administrator. "This year's survey is a chance for saltwater anglers to help NOAA get an updated, accurate picture of how recreational fishing translates into economic vitality and jobs for Americans."

NOAA and the saltwater angling community need timely economic data to help evaluate the economic importance of recreational fishing activities. The data give a more accurate look at the economic effects of fishing regulations and changes in the ecosystem caused by natural or manmade events. The information gathered in the survey will contribute to more informed decisions on a variety of recreational fishing issues.

"By surveying the recreational fishing community, we are following through on one of the recreational fishing community's top priorities identified at the 2010 sportfishing summit," said Eric Schwaab, assistant NOAA administrator for NOAA's Fisheries Service. "The survey will ensure that NOAA and the fishery management councils have the best data when considering management actions that affect anglers."

Throughout 2011, NOAA will survey a random sampling of the more than 15 million saltwater anglers in each of the 23 coastal states and Puerto Rico for the 2011 National Marine Recreational Fishing Expenditure Survey. The survey will include a random sampling of people who fish from shore, from docks, from party or charter boats and from privately owned boats. Field interviews have begun and will continue throughout the year. Surveying began in January in Florida, Alabama, Mississippi, Louisiana, North Carolina, California, Hawaii and Puerto Rico. It will begin in the remaining Atlantic states and Texas in March and April, and in Alaska, Oregon and Washington in May. This is NOAA's second national survey focusing on how much saltwater anglers spend on their sport.

NOAA and its state partners will ask anglers how long their fishing trips last and how much they spend on bait, boat fuel, ice, charter fees and other expenses. Anglers will also be asked to participate in a follow-up survey that will ask them to estimate what they spend on durable goods such as boats and fishing tackle used for saltwater angling for the previous 12 months. Those who participate in both parts of the survey will help NOAA produce accurate economic information.

Economists from NOAA's Fisheries Service throughout the country as well as regional and state partners are assisting with the 2011 survey. Once the economic data are collected, they will be analyzed and released as a NOAA report. The most recent economic study in 2009 showed that anglers' expenditures generated $59 billion in sales and supported more than 385,000 jo