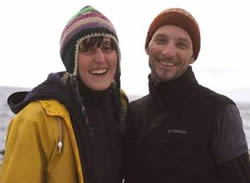 SOUTHERN OCEAN, Australia -- Among the crew of the Greenpeace ships in the harsh waters of the Southern Ocean he is known as the whale rider.

Australian activist Mikey Rosato's defiant action of standing on the back of a harpooned whale has inspired the protesters to continue their defiance of the Japanese whalers.

"I jumped onto the whale because I wanted to show the Japanese crew that, just because the whale was dead, the protest at what they were doing was not over," Mr Rosato said.

"We were out in an inflatable boat and for 3 hours we put ourselves between the whalers and three whales, one of which was just a baby," said Mr Rosato, 33, on a satellite phone on the Arctic Sunrise icebreaker last week.

"They finally got a clear shot and hit the larger of the whales. Once they harpooned the whale it dived for 10 minutes and when it came up it was dead.

"I managed to jump on to it. I didn't see what I did as brave or courageous or even risky."

As he held up his Stop Whaling banner the Japanese crew on board the whaling ship turned their water cannons on him.

"They aim for your ears and face which means you have to protect yourself and cannot hold on. They are quite aggressive," Mr Rosato said.

As the cannon sprayed him he neatly stepped off the back of the dead minke whale and onto a small iceberg.

"The intimacy of being with the whale as it died left me feeling quite traumatised and absolutely helpless," he said.

As he looked up at the bow of the Greenpeace ship, he saw his Irish wife, Lally, 30, watching. "When I looked over to her I could see her pain," he said.

Australian expedition leader Shane Rattenbury saw the protest from the bridge and said: "It was an inspiring and amazing thing to watch. Mikey is a very passionate person and everyone was very inspired by his protest."

It was a small victory in what Greenpeace is billing as its most successful foray into the Southern Ocean yet. The new Greenpeace vessel Esperanza is faster than the old Arctic Sunrise and the Japanese fleet has been unable to outrun the protesters.

"We are here to show the world what is going on and to try to stop them killing the whales," Mr Rattenbury said.

For several days it appears the protesters have succeeded, with the Japanese fleet concentrating on trying to shake off their dogged pursuers rather than hunt whales.

Mr Rattenbury and his 57-strong international crew, including six Australians, believe the Japanese do not want more embarrassing pictures of slaughtered whales appearing in the world's newspapers.

Sydney nurse Anne Densley, 35, is working as a medic on board the Greenpeace ships and believes their efforts have not been in vain.

"It is very hard to stop them whaling but we certainly seem to have had some success," she said.

For Mr Rosato the protest is about the future. "Lally and I would like to have children one day and we would like there to be some whales left in the ocean for them to see," he said.