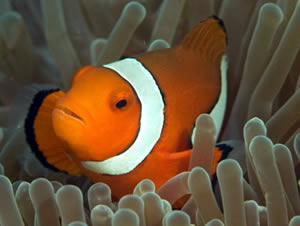 WOODS HOLE, Massachusetts -- Coral reef fish hatchlings dispersed by ocean currents are able to make their way back to their home reefs again to spawn, says a groundbreaking study published today in the journal Science. The study, whose findings are considered a major advance for fish conservation biology, was conducted by an international team of scientists from Australia, France, and the U.S. using a novel tagging method to track two populations of fish, including the endearing orange, black, and white reef-dwelling clownfish made famous in the movie "Finding Nemo."

The study took place on coral reefs in a marine protected area in Papua New Guinea. Scientists tested a new method to trace fish from birth to spawning and detect the percentage of fish hatched on one reef that return there to spawn. The techniques used in this study can reveal the extent to which fish populations on separate reefs are isolated breeding populations, or connected by fish movements (known as "connectivity"). Such information is critical to effective management of reef fish populations.

Following two fish species, the clownfish (Amphiprion percula) and the vagabond butterflyfish (Chaetodon vagabundus), the scientists found that young of both species made it back to their home reef about 60 percent of the time, a surprising result for fish larvae that had dispersed from a small reef habitat into a large area. The researchers tagged fish at the reef surrounding a small island, Kimbe Island, within a recently-designated Marine Protected Area in Kimbe Bay, Papua New Guinea.

"If we understand how fish larvae disperse, it will enable better design of marine protected areas, and this will help in the rebuilding of threatened fish populations," said Almany, lead author on the Science article. Other members of the team were Michael Berumen of the University of Arkansas, Woods Hole Oceanographic Institution (WHOI) biologist Simon Thorrold, and Serge Planes of the Universite de Perpignan.

The study's results highlight three notable achievements. This is the first time scientists have successfully used a new internal tagging method in the field, as well as in the lab. It is the first larval tagging study of a pelagic (open water-swimming) spawning fish. It is also the first comparison between two fish species with different reproductive strategies and dispersal patterns.

The tagging method the team employed was developed by Simon Thorrold at WHOI. The process involves injecting minute quantities of harmless stable barium isotopes into breeding female fish of both species. "The isotopes are passed to the offspring and incorporated into the ear bones - or otoliths - of the developing embryos," said Thorrold, "thereby labeling the hatchlings at birth with the isotopes as permanent traceable tags."

Two months after injecting females, the scientists returned and captured newly settled fish at the same reef to determine how many had returned to their home reef and how many had migrated from other nearby reefs. The percentage of fish whose otoliths were labeled with the rare barium isotope was identified at WHOI through a technique known as laser ablation inductively coupled plasma mass spectrometry (ICP-MS).

The two species have different reproductive styles. Butterflyfish release eggs and sperm into the water, and the larvae drift and swim freely for more than a month before finding a home reef. In contrast, clownfish spawn eggs that are attached to the reef for a week before the larvae hatch and disperse in oceanic waters for 10-14 days. The larval clownfish must then find a reef, and a suitable anemone, that will be home for the remainder of its life. Currents inevitably carry both species away from the parental reef, because larval fish cannot swim well, but this study confirms that the majority of both species appear to find their way home after completing the oceanic larval phase.

Reef fish conservation programs utilizing marine protected areas are based on assumptions about how many fish migrate in from other areas and how many return to home areas to spawn. At a time of increasing pressures on coral reef ecosystems, this study provides an important piece for planning the optimum size of coral reef protected areas and breeding populations.

"Just as importantly," said Almany of their results, "40 percent of the juveniles came from other reefs that are at least ten kilometers (five miles) away, which indicates significant exchange between populations separated by open sea. This shows how marine protected areas can contribute to maintaining fish populations outside no-fishing zones."

The successful test of this method in the field offers scientists and managers a powerful new way to evaluate the effectiveness of management models and practices based on direct information. Thorrold is continuing this work, using the maternal labeling technique to evaluate the degree of connectivity in other fish populations, including endangered Nassau grouper in the Caribbean.