Shake Up At Scuba Diving Magazine As Jason White Out, Keith Phillips In As Editor, Publisher

Study: Scuba Diving Not A Risk for Decline in Lung Function

US tourist scuba diving in Jamaica goes missing, feared drowned; 'we are hoping for the best' 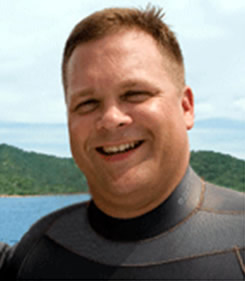 MIAMI, Florida -- F+W Publications, parent company of Scuba Diving magazine, has announced that Keith Phillips has been promoted to Publisher and Editor-in-Chief of the magazine and scubadiving.com. Current publisher Jason White is leaving the magazine "to pursue other interests".

Phillips has been with Scuba Diving since 1994, serving in various editorial roles. He was promoted to Executive Editor in 2006 and led the redesign of Scuba Diving, which debuted in a new, larger size with the March 2008 issue.

David Blansfield, President of the Magazine Division at F+W, said in a press release, that Scuba Diving magazine and ScubaDiving.com have made great strides this year, with recent design upgrades in the print magazine and the in-the-works web site redesign. "We're committed to serving the needs of the scuba diving community through our new and improved multi-media platform. Moving forward, readers and advertisers alike will benefit from a leader like Keith who understands their passions and aspirations."

Keith Phillips, new Publisher and Editor-in-Chief, vowed that "the mission at Scuba Diving is unchanged: Deliver the best editorial products for divers and the most effective advertising and marketing solutions for our clients. Scuba Diving and ScubaDiving.com have always been the most trusted source of information for passionate recreational divers. And because we put readers first, we can also provide our advertising partners the best way to reach the sport's most active and affluent participants."

"On behalf of the entire Scuba staff, I wish to thank Jason White for his tenure as publisher," Phillips said. "He and I worked closely to position Scuba Diving and ScubaDiving.com for the next phase of growth, and I now have the privilege of building on that foundation."

It was a relatively short time at the helm for Jason White, as he was appointed to publisher of Scuba Diving in late 2007. Prior to Scuba Diving, White was with World Publications, where he was publisher of Cruising World, Power Cruising and Sailing World.