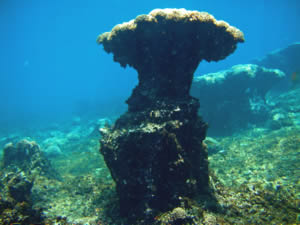 Coral reefs formed in water with naturally high in carbon dioxide (CO2) not as stable as those in lower CO2 areas. Credit UVI.

WASHINGTON, D.C. -- Cements that bind individual coral skeletons and larger coral reef structures are predominantly absent in waters with naturally high levels of carbon dioxide (CO2), making these reefs highly susceptible to a wearing down of their physical framework, say scientists with NOAA’s Atlantic Oceanographic and Meteorological Laboratory in Miami, Fla. and other institutions.

The study, released in the July 28 issue of the Proceedings of the National Academy of Sciences, found that the coral reefs of the eastern tropical Pacific provide a real-world example of the challenges all coral reefs will face under high-CO2 conditions resulting in ocean acidification.

This is the first attempt to characterize the impacts of ocean acidification on coral reef ecosystems by examining naturally occurring, high-CO2 reef environments.

Lead author, Derek Manzello, a coral reef ecologist at AOML, and his colleagues analyzed the abundance of cements within reef framework structures from the eastern tropical Pacific, which is an entire region exposed to naturally higher levels of carbon dioxide, and compared them to reefs from the Bahamas, an ecosystem exposed to comparatively lower levels of carbon dioxide.

The impact of ocean acidification seems to be a drastic reduction in the production of the cements that allow coral reefs to grow into large, structurally-strong formations that can withstand high wave action.

“Reefs are constantly degraded by mechanical, biological, and chemical erosion,” said Manzello. “This study indicates that poorly cemented reefs that develop in an acidic ocean will be much less likely to withstand this persistent erosion. These results imply that coral reefs of the future may be eroded faster than they can grow.”

Ocean acidification occurs as much of the new carbon dioxide being placed into the atmosphere is dissolved into the ocean’s surface waters. This increase in the amount of carbon dioxide in ocean waters leads to a decrease in the amount of carbonate available to organisms like corals, which make calcium carbonate to build the stony structure they inhabit. Calcium carbonate is also the basis of the cement that binds one coral to another and to sand that fills spaces between them.