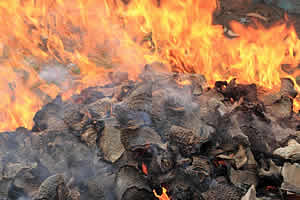 One year after President Porfirio Lobo Sosa created a permanent shark sanctuary in Honduran waters, he joined the country's top law enforcement officials yesterday afternoon to watch the burning of hundreds of illegal shark fins. These confiscated fins, worth up to $300 per pound ($700 per kg) in the global marketplace, were destroyed as part of ongoing efforts by authorities to enforce shark protections in Honduras.

"Unfortunately there are few limits on the number of sharks that can be killed beyond the borders of our sanctuary, but we are committed to putting a stop to this activity in Honduras," Lobo said. "These animals play an important role in maintaining healthy coastal areas, our fisheries are dependent upon them, and they provide revenue by bringing tourists and divers to Honduras to see sharks. They are worth far more alive than dead."

The fins, mostly from nurse sharks, were seized in April by the Honduran navy. The International Union for Conservation of Nature reports that 30 percent of all shark populations around the world are threatened or near threatened with extinction.

Shark sanctuary enforcement efforts are gaining momentum worldwide. In 2011 and 2012, several other countries took similar action to enforce their laws, including Palau and the Marshall Islands, where Taiwanese and Japanese vessels were fined $65,000 and $125,000, respectively.

"We salute the government of Honduras and its law enforcement officers for swiftly implementing its shark sanctuary," said Maximiliano Bello, who advises the Pew Environment Group on shark conservation and spoke at today's event. "More comprehensive measures and enforcement actions such as these are still needed to protect the ocean's top predators from extinction."

Honduras has joined five other countries—Palau, the Marshall Islands, Tokelau, the Bahamas, and the Maldives—in taking the bold step of permanently protecting sharks in their waters. These sanctuaries cover more than 1.8 million square miles of ocean.