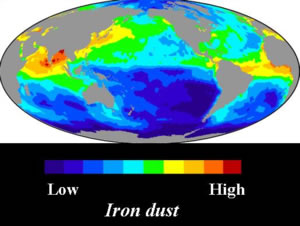 a digital image showing how the input of iron into marine ecosystems can affect phytoplankton growth in the oceans. 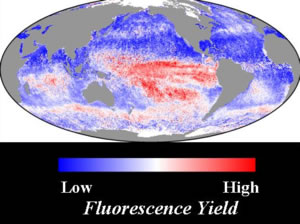 CORVALLIS, Oregon -- Researchers from Oregon State University, NASA and other organizations said today that they have succeeded for the first time in measuring the physiology of marine phytoplankton through satellite measurements of its fluorescence – an accomplishment that had been elusive for years.

With this new tool and the continued use of the MODIS Aqua satellite, scientists will now be able to gain a reasonably accurate picture of the ocean's health and productivity about every week, all over the planet.

Data such as this will be critically important in evaluating the effect on oceans of global warming, climate change, desertification and other changes, the researchers said. It will also be a key to determining which areas of the ocean are limited in their productivity by iron deficiency – as this study just showed the Indian Ocean was.

"Until now we've really struggled to make this technology work and give us the information we need," said Michael Behrenfeld, an OSU professor of botany. "The fluorescence measurements allow us to see from outer space the faint red glow of tiny marine plants, all over the world, and tell whether or not they are healthy. That's pretty cool."

Ocean phytoplankton are single-celled organisms that are responsible for half of the photosynthetic productivity on Earth. They fuel nearly all marine ocean ecosystems and are the base of the marine food chain.

Measurements of phytoplankton are an important way to understand the broader health and productivity of the ocean, researchers say. Some of the measurements available prior to this, such as phytoplankton biomass or their carbon-to-chlorophyll ratio, provided part of the picture, but were often only available for tiny portions of the ocean at a time.

To grow, however, these phytoplankton absorb energy from the sun, and then allow some of that energy to escape as red light that is called fluorescence. The new measurements of fluorescence, literally the dim glow that these plants put off, will help complete the understanding of ocean health on a much broader and more frequent basis.

Some surprises are already in.

It was known, for instance, that parts of the equatorial Pacific Ocean, some regions around Antarctica and parts of the sub-Artic Pacific Ocean below Alaska were limited in production by the poor availability of iron. The newest data, however, show that parts of the northern Indian Ocean during the summer are also iron limited – a phenomenon that had been suggested by some ocean and climate models, but never before confirmed.

"Iron is often brought to the oceans by dust coming off terrestrial regions, and is a necessary nutrient that often limits the potential for marine phytoplankton growth," said Allen Milligan, an OSU assistant professor of botany and co-author of this study, which is being published in the journal Biogeosciences.

"If forces such as global warming, circulation changes or the growth of deserts change the amount of dust entering the oceans, it will have an impact on marine productivity," Milligan said. "Now we'll be able to track those changes, some of which are seasonal and some of which may happen over much longer periods of time. And we'll also be able to better assess and improve the climate models that have to consider these phenomena."

In continued studies, researchers at OSU hope to reproduce the marine environment that these phytoplankton cells live in, learn more about their basic biology and better understand why and how they can be seen from space. Further research may also explore how the oceans might respond to iron enrichment.