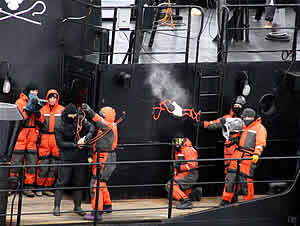 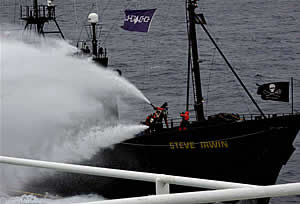 The hawser aims to disable the rudder and propeller of the Nisshin Maru.

From around 08:00JST (1200hrs NZDT; 1000hrs AEDT) today, the Steve Irwin deployed from its stern a rope with floats attached and repeatedly made dangerously close approaches to the Nisshin Maru, crossing immediately in front of the Japanese vessel’s bow.

The Nisshin Maru used its water cannons and broadcasted warning messages to prevent the Dutch vessel approaching. There were no damages to the Nisshin Maru or injuries to its crew.

On the evening of February 16 the Bob Barker started to reduce speed and to fall behind the Nisshin Maru disappearing from its radar. The Steve Irwin is still following the Nisshin Maru and apparently preparing another attack.

The Institute of Cetacean Research strongly condemns the Sea Shepherd Conservation Society dangerous and violent actions carried out against Japan’s whale research vessels and crews who are conducting perfectly legal research activities in the Antarctic.

The ICR urges again the Netherlands (the Steve Irwin’s flag state), Australia (the de facto home port country to the Steve Irwin), the Togolese Republic (the Bob Barker’s flag state), and all other related countries to take every means available to prevent the Sea Shepherd Conservation Society illegal and violent actions.

The ICR strongly requests that these countries observe their international obligations and deal with the Sea Shepherd in a strict and objective manner.