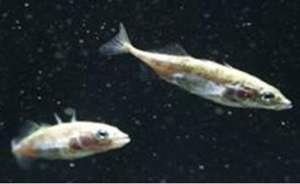 Follow that fish -- threespine sticklebacks that were used in the experiments. Credit: University of Leicester

LEICESTER, U.K. -- For animals that live in social groups, and that includes humans, blindly following a leader could place them in danger.

To avoid this, animals have developed simple but effective behaviour to follow where at least a few of them dare to tread – rather than follow a single group member.

This pattern of behaviour reduces the risk of imitating maverick behaviour of an individual as the group recognise that consensus is better than following someone that goes it alone.

Dr Ward, formerly of the University of Leicester, led the study. He said: “Social conformity and the desire to follow a leader, regardless of cost, exert extremely powerful influences on the behaviour of social animals, from fish to sheep to humans.

“The decision of whether to follow the lead of another individual is a fundamental problem for grouping animals - leadership in an animal social group may be assumed by an individual (or individuals) which exhibit a directional preference according to the habitat information it holds. This may be information about, for example, the location of food or a predator’s whereabouts. In such cases, the benefits to followers of acquiring this information may be significant, but whilst information is a valuable commodity, simple acceptance or ‘blind copying’ could result in a string of ill-informed decisions. Thus group members should exercise a degree of discrimination with regards to whom they follow.”

The team investigated how animals use the behaviour of others to make more accurate movement decisions, especially when it isn’t possible to identify which individuals possess pertinent information? One plausible answer is that animals in groups only respond when they see a threshold number of fellow group members perform a particular behaviour.

Dr Ward added: “Our experiments examined whether groups of fish could be led by replica individuals of the same species. We explored following behaviour both in a neutral situation and in a potentially dangerous situation where the subject fish had to be persuaded to swim past a model of a predatory fish. That the test fish regarded the model predator as a threat was confirmed by our control experiments, where fish showed a strong aversion to the predator model. Despite this, solitary test fish were prepared to follow a replica leader towards the predator model, suggesting that an isolated member of a social species will pay almost any cost to stick close to a ‘friend’. When test fish were in larger groups of 4 and of 8 fish, however, the picture was very different: a solitary replica leader was ignored. Instead, it required 2-3 replica leaders to influence these larger groups.

“By adopting this ‘quorum response’, where subjects are prepared to follow a leader only when a threshold number of individuals behave in a particular way, animals can reduce the likelihood of spreading non-adaptive following behaviour. Whereas a single, maverick individual may act irrationally in a given situation, it is far less likely that two individuals will act so strangely.”

The researchers say that in order to benefit fully from information transfer, animals - and this would include humans - may have to follow quorum rules to filter out maverick behaviour.

The researchers conclude: “The reason why this study is important is that while quorum responses have been shown in invertebrates, like ants, bees and cockroaches, this is the first time (as far as we know) that it has been shown in so-called higher animals with relatively complex brains. The quorum decision rule is simple, but extremely effective, and it has important implications for human decision-making. In fact some of the group who have worked on the fish research have recently shown that groups of humans can be persuaded to take group decision guided by just one informed individual.

“We chose to test quorum decision-making with fish because they're easier to work with, but although we tend to think that we are more complex than fish in our decision-making, the reality is that we're more similar to them than we may choose to admit!

“Much human action is driven by simple decision rules and our work illustrates how those rules are common throughout the animal kingdom. A better understanding of this decision-making mechanism in humans and other animals helps us understand how people behave in crowds and shows why sometimes people in groups do apparently stupid things, such as stand in the street and stare skyward when there’s nothing to see, just because someone else is doing it.”