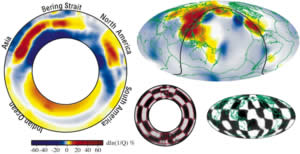 The location of the watery slice -- red line in the upper right figure -- is a map of the seismic attenuation at a depth of roughly 620 miles.

ST. LOUIS, Missouri -- A seismologist at Washington University in St. Louis has made the first 3-D model of seismic wave damping — diminishing — deep in the Earth's mantle and has revealed the existence of an underground water reservoir at least the volume of the Arctic Ocean.

It is the first evidence for water existing in the Earth's deep mantle.

Michael E. Wysession, Ph.D., Washington University professor of earth and planetary sciences in Arts & Sciences, working with former graduate student Jesse Lawrence (now at the University of California, San Diego), analyzed 80,000 shear waves from more than 600,000 seismograms and found a large area in Earth's lower mantle beneath eastern Asia where water is damping out, or attenuating, seismic waves from earthquakes.

The traditional method seismologists use to image the Earth below us is to measure the speed of seismic waves. This will provide a sort of CAT scan of the Earth's core and mantle. Using wave speeds alone is a problem, however, because they cannot distinguish between temperature and composition variations.

The research is described in a forthcoming monograph, Earth's Deep Water Cycle, which is in press to be published by the American Geophysical Union.

An increasingly popular method, which Wysession used, is to analyze the way waves damp out from their source. If you take a hammer and pound it hard on a desk, waves will go from the source to the end of the table with the mass of the table lessening, or attenuating, the power of waves. A picture near the striking point might topple, but a stapler two feet away might not even budge. Attenuation data tell seismologists how stiff a region is, which is a function of how hot it is and how much water it contains. Looking at the seismic wave speeds and attenuation at the same time can tell whether an anomaly is due to temperature or water.

In analyzing the data, Wysession first saw large patterns associated with known areas where the ocean floor is sinking down into the earth. Beneath Asia, the fallen Pacific sea floor piles up at the base of the mantle. Right above that he observed an "incredibly highly attenuating region, that is both very damping and slightly slow," he said. "Water slows the speed of waves a little. Lots of damping and a little slowing match the predictions for water very well."

Previous predictions calculated that a cold ocean slab sinking into the earth at 1,200 to 1,4000 kilometers beneath the surface would release water in the rock that would escape the rock and rise up to a region above it, but this was never previously observed.

"That is exactly what we show here, the exact depth and high attenuation amounts right above it," Wysession said. "I call it the Beijing anomaly. Water inside the rock goes down with the sinking slab and it's quite cold, but it heats up the deeper it goes, and the rock eventually becomes unstable and loses its water. The water then rises up into the overlying region, which becomes saturated with water.

"If you combine the volume of this anomaly with the fact that the rock can hold up to about 0.1 percent of water, that works out to be about an Arctic Ocean's worth of water."

In recent years, seismologists have become excited at the possibility of a feature like the Beijing anomaly. The availability of vast amounts of digital seismograms made possible the discovery by Wysession and Lawrence, who wrote many thousands of lines of computer codes to do the analyses.

Seventy percent of the earth is covered by water, which is very important for the earth's geology, serving as a lubricant that allows efficient convection and plate tectonics and the continental collisions that form mountains.

"Water is like a lubricant, constantly oiling the machine of mantle convection which then drives plate tectonics and causes the continents to move about Earth's surface," Wysession said. "Look at our sister planet, Venus. It is very hot and dry inside Venus, and Venus has no plate tectonics. All the water probably boiled off, and without water, there are no plates. The system is locked up, like a rusty Tin Man with no oil."