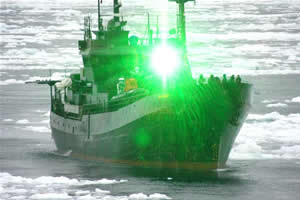 Japanese research whalers in the Antarctic claim they have come under attack from an illegal laser weapon aboard the flagless Sea Shepherd Conservation Society vessel Bob Barker.

The text of Japan's Institute of Cetacean Research press release from the incident follows:

The photonic disruptor fired by the Bob Barker is an illegal weapon that can cause flash-blindness and could cause more permanent damage to the human eye including retinal burns.

On the 21 February the Nisshin Maru reached the Antarctic pack ice area.

At about 17:30hrs JST February 21 (2130hrs NZDT February 18; 1930hrs AEDT), the Bob Barker approached to near miss distance firing repeatedly an illegal green laser weapon to the Nisshin Maru crew while the Steve Irwin helicopter filmed the scene from the air.

There was no damage to the Nisshin Maru nor were there injuries to its crew.

The Institute of Cetacean Research strongly condemns Sea Shepherd’s dangerous and violent actions carried out against Japan’s whale research vessels and crews who are conducting perfectly legal research activities in the Antarctic.

The ICR urges again the Netherlands (the Steve Irwin’s flag state), Australia (the de facto home port country to the Steve Irwin), and all other related countries to take every means available to prevent the Sea Shepherd Conservation Society illegal and violent actions.

The ICR strongly requests that these countries observe their international obligations and deal with the Sea Shepherd in a strict and objective manner.