'Shadow Divers' Team to Tackle Belize's Blue Hole; 'Because it is there' 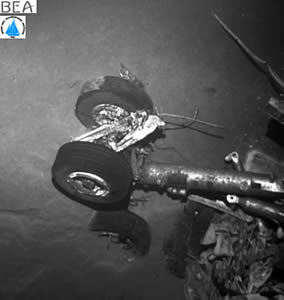 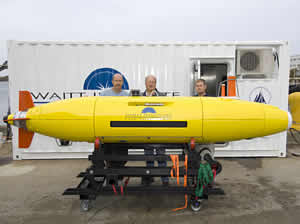 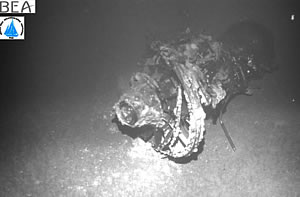 One of the engines from the Air France Airbus A-330 that crashed in 2009 photographed from a REMUS 6000. (BEA/Woods Hole Oceanographic Institute) 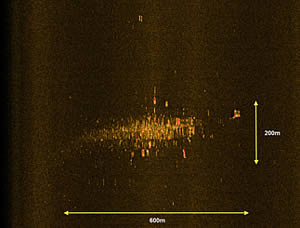 WOODS HOLE, Massachusetts -- A search team led by the Woods Hole Oceanographic Institution (WHOI) has located the wreckage of Air France Flight 447 some 3,900 meters, or nearly 2.5 miles, below the surface of the Atlantic Ocean off Brazil's northeastern coast.

The team left the port of Suape, Brazil, aboard the vessel Alucia on March 22, arriving at the search site on March 25. After one week of searching, one of the mission's three autonomous underwater vehicles (AUVs), the REMUS 6000s, detected debris on the seafloor. A second vehicle was dispatched to the area for more detailed sonar mapping and photographic imaging. The images it brought back were relayed to BEA, French air safety investigation authority, which identified the wreckage as the Airbus A 330. All three REMUS vehicles are currently mapping the area to get a comprehensive view of the accident site.

Flight 447, a scheduled commercial flight from Rio de Jeneiro to Paris, crashed into the Atlantic Ocean on June 1, 2009, carrying 216 passengers and 12 crew members. WHOI led the search under the direction of the BEA, Bureau d'EnquÃªtes et d'Analyses.

The search mission was the fourth attempt to locate the aircraft. WHOI also participated in the third search effort. WHOI Senior Engineer Mike Purcell was the chief of sea search operations for the mission.

"We were confident from phase three [the last search attempt] that if we were searching in the right area, the vehicles' sonar could pick out the aircraft," said David Gallo, the project leader at WHOI. That success came just one week into the latest mission "attests to the efficiency of the vehicles and the competence of this team," said Purcell.

Images included photos of the fuselage, engine and landing gear and a sonar image of the crash area. Investigators plan to examine the wreckage in detail and to continue to search for the plane's flight recorders

"We are honored to have been part of this effort to locate Air France Flight 447 and proud to be able to bring hope of resolution to the families of the victims," said Susan Avery, president and director of WHOI.

The search was targeted in an area of about 3,900 square miles (10,000 square kilometers), several hundred miles off northeastern Brazil.